Hunter
Inferno (formerly)
Honey (by Stephanie McMahon)
Dad (by his children)
My son-in-law (by Mr. McMahon and Linda McMahon)
My brother-in-law (by Shane McMahon)

Being with Shawn Michaels and Undertaker.

Defeat the Spirit Squad (succeeded).
To rescue his friend Undertaker from being beaten up by the Shield (succeeded).

Triple H is an anti-hero from the WWE shows and an member of D-Generation X with Shawn Michaels. He is Shawn Michaels' bodyguard and The Undertaker's best friend.  He is a recurring character from Scooby-Doo! Wrestlemania Mystery. He serves in the shows as an anti-heroic protagonist. He is the son-in-law of Vince McMahon and he has a wife named Stephanie McMahon. Originally named Hunter Hearst Helmsley, Triple H makes his debut in 1995 in the WWF (now WWE). In 1997 and 1998, his name was HHH (Triple H). He succeeds his father-in-law Vince McMahon as the CEO of WWE.

In WWE Vengeance 2006 along with Shawn Michaels, he defeated The Spirit Squad to impress his father-in-law Vince McMahon.

In Survivor Series 2006, along with Shawn Michaels, The Hardy Boyz and CM Punk, he defeated The Spirit Squad and his friends in a Elimination Tag Team Match.

In 2010, he wishes his friend Shawn Michaels good luck to his retirement for the Hall of Fame.

In 2012 at Wrestlemania 28 after being defeated by The Undertaker, he was helped by him and Shawn Michaels to leave the Wrestling Ring with full respect.

In 2013 when Smackdown! went off air, Triple H along with Road Dogg and Billy Gunn saves The Undertaker who was been assaulted by The Shield.

In Scooby-Doo! Wrestlemania Mystery along with Mystery Inc. and Vince McMahon, he successfully caught Cookie who has framed Scooby-Doo for stealing the WWE title belt.

He successfully buried countless amount of new talent such as CM Punk, Dean Ambrose, Dolph Ziggler, and Zach Ryder. He even buried older talent such as Sting, Goldberg, Booker T, and basically every single WCW wrestler who came to WWE. He attempted to bury Randy Orton and Daniel Bryan, but they managed to overcome him.

In the years, he decides to keep an eye on his friend The Undertaker to assume his safety. 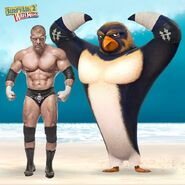 Triple H as a penguin in Surf's Up 2: WaveMania

Triple H trying to calm down The Undertaker

Triple H and The Undertaker

Add a photo to this gallery
Retrieved from "https://hero.fandom.com/wiki/Triple_H?oldid=1908024"
Community content is available under CC-BY-SA unless otherwise noted.