Trish is one of the main characters of the Devil May Cry franchise. She is a creation of the satanic figure, Mundus. Mundus created Trish in the image of the late Eva, the protagonist Dante’s mother. Trish is demonic in nature despite her appearance and as such has access to several supernatural abilities reflecting her true natures such as super-strength, electrokinesis. Though she has gone on to work solo she frequently returns to Dante's side to help him out.

Trish is a recurring playable character in the series, and appears in every Devil May Cry installment, with the only exception being Devil May Cry 3: Dante's Awakening.

In the first Devil May Cry game, her corset has a thunderbolt shape in the middle.

As Gloria, she has dark skin and a bob styled platinum blonde hair and wears a white outfit which exposes her cleavage and has orange linings, long white boots, white gloves, and has a tail.

Trish arrives at Dante's initially as a client and then quickly as a foe, engaging him in combat. She attempts to electrocute him, but Dante quickly demonstrates his mastery over his demonic powers and overpowers her. Trish seems to take the defeat in stride as if it were expected and tells Dante that she needs his help, as if the fight were a forgone conclusion. Trish brings Dante to Mallet Island, where Mundus is planning to open the gate to the Hell to cross over to the human world. The game revolves around Dante's navigation through the cursed isle.

Trish soon reveals she was created by Mundus to lure Dante to the island and kill him. Trish betrays Dante during a fight with boss, Nightmare, and attempts to kill him. Even after Trish's betrayal Dante still saves her from being crushed by falling rocks. Dante states the only he felt compelled to save Trish was it because she had the physical appearance of his late mother. Dante warns Trish however to stay away from him. Trish is deeply moved by Dante's nobility and frankness, all-the-same she still returns to Mundus to report on the situation. Towards the end of the game Mundus tries to kill Dante by firing a very powerful beam from his third eye, Trish feeling obligated to returns Dante's gesture, sacrifices herself instead, pushing Dante out of the beam's path and allowing herself to be struck instead.

After morning Trish;s death, Dante leaves her with the Sparda and the Perfect Amulet to go finish off Mundus in the underworld. After the battle Dante becomes cornered by a mutated Mundus but hears his mother's voice followed by Trish, who bursts through the wall to aid him. Trish adds her power to Dante to her defeat Mundus, finishing him off. With Mundus destroyed, Trish embraces Dante and begins to cry. Dante points out that Trish has become human, because "devils never cry". The two leave the isle as it collapses and Dante. The game closes with Trish and Dante shown working together as partners out of the renamed "Devil Never Cry" office.

Though Trish doesn't appear in Devil May Cry 2's storyline, she is presumably still carrying out official demon hunting elsewhere. Trish may be unlocked by beating the game on Hard Mode as Dante. Once unlocked Trish can be used as a character throughout the entire game on future play-through, equipped with Sparda, Luce & Ombra and Nightmare-γ as her weapons. As shown in the first game's opening, she has to a lightning shot ability.

By the time of the fourth Devil May Cry game Trish working with Dante as a fellow Devil Hunter. The character, Lady, informs them about the Order of the Sword (an order that worships Dante's late demon father Sparda as their messiah). To infiltrate the order, Trish takes the Sparda sword and assumes the alias of "Gloria"  and takes the sword to Sanctus. "Gloria is quickly promoted to Executive of the Holy Knights.

Trish uses her potion to spy on the Holy Knights. Because of her looks and rapid promotion, she greeted with a negative reception by the some other members of the Order. Eventually she meets the hero, Nero, during his trek through the mystical blizzard to Fortuna Castle. After some brief explanations the two part ways to attend their own itineraries.

After the second battle between Dante and Nero, Trish disregards her disguise. Once the Savior is activated, she evacuates the island's townspeople while Dante attacks the giant statue.

Once both Sanctus and the Savior are defeated, Trish returns to the Devil May Cry shop with Dante. Trish he gets a phone call from a client with another job for him, Trish and Lady join Dante on the way out of the shop to help him out.

Trish was designed by Mundus to be cruel at heartless with only the illusion of empathy to play on Dante's perceptions. After Dante saves Trish's life it is in-fact Trish whose perceptions are challenged and she begins to conceptualize emotions and conscience.

Trish's emotions do get the better of her eventually and complete her character-arc when she sacrifices herself to spare Dante from Mundus' wrath.

After Trish's revival she becomes much more in-touch with her feelings though still not to the point of being over-emotional and teams-up formally with Dante as his partner. In the anime in particular Trish is shown to be playful and vampish, Devil May Cry 4 seems to back this up even further. 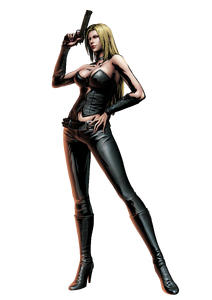 Trish as she appears in the anime. 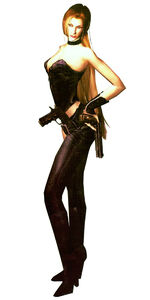 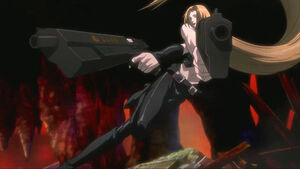 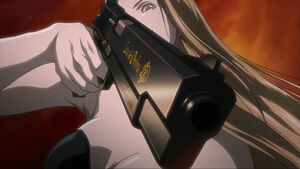 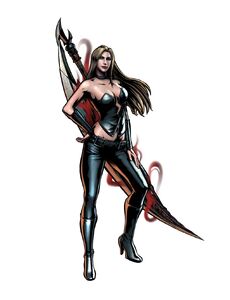 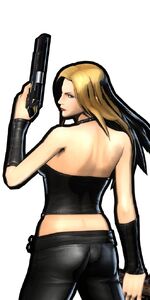 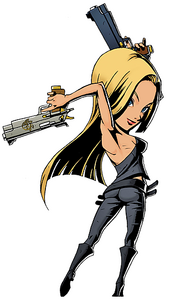 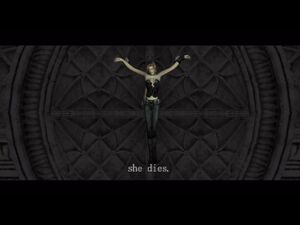 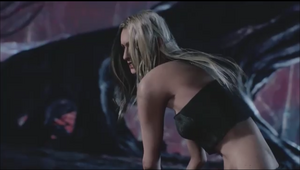