Helping the residents of Empire City.

Heal as many wounded as she can.

Trish Dailey is one of the main protagonists in the inFAMOUS series, and is the love-interest for Cole MacGrath.

She was voiced by October Moore, who also voiced the Wii Fit Trainer.

Trish Dailey went to medical school and went into a relationship with Cole MacGrath at an unknown time, she even became friends with Zeke Jedediah Dunbar since he was Cole's roommate.

After the Ray Sphere went off, Trish lost her sister Amy Dailey and went to help Cole recover from passing out after the explosion. She was later seen after the Reapers went to attack for food and met up with both Cole and Zeke, she later left after hearing the 'Voice of Survival' yelled out that Cole was the reason for the explosion. Trish was later seen where she was healing some people who were poisoned by the Reaper's tar and later healed Cole after helping fix the fountain, she often phoned Cole when he was trying to remove the tar from the water supplies and when Cole turned the energy back on at the Warren District.

She later asked Cole to help him with a bus ride to the hospital from the Neon to the Warren, only to be flung to the roof of the hospital by Alden Tate, where Cole went to save her. Cole occasionally phoned Trish until Kessler kidnapped her. Trish was later seen where Cole had to make a choice to ever save Trish or to save five doctors, either way Trish wound die in front of Cole, fueling his anger towards Kessler. Towards the end of the game, Cole learns that Kessler is an alternate version of himself, and learns that Kessler killed Trish to prepare his past self for the Beast.

Trish was mentioned by both Zeke and Cole when they tried to bring back the power to a part of New Maras.

In an altered timeline, Trish married Cole and had two children, only to die at the hands of the Beast, leading to Cole to go back in time and create a plan to wipe out the Beast by speeding up the Ray Sphere program. 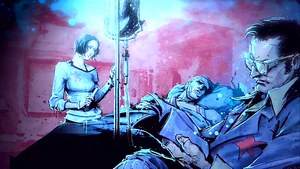 Trish and Zeke watching over Cole. 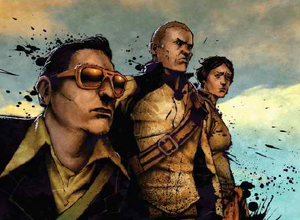 Trish with Cole and Zeke.

Trish in the alternate timeline during her wedding with Kessler/Cole.
Add a photo to this gallery

Retrieved from "https://hero.fandom.com/wiki/Trish_Dailey?oldid=1790054"
Community content is available under CC-BY-SA unless otherwise noted.