Freedom Fighter
Trish Una is a side character and ally featured in Golden Wind. Trish is the estranged daughter of Passione's Boss and Donatella Una. Being a target for the Boss' numerous enemies, she is bodyguarded by Bruno Bucciarati's gang.

In Japanese, she is voiced by Rio Natsuki in the PS2 game, Nao Tōyama on JoJo's Bizarre Adventure: Eyes of Heaven, and Sayaka Senbongi in the Anime. In the dub, she is voice by Lizzie Freeman who also voiced Lily from Dragalia Lost and Meggy Spletzer from SMG4.

Trish is a 15-year-old girl of average height and slim build. She wears her light hair (often depicted as pink) in a loose whirl atop her head.

Trish wears a dark brassiere connected to a necklace patterned in tiles of alternating shades of mathematical symbols. She wears a long skirt of similar design, split at the top of her left thigh, and a pair of knee-high small-heeled boots without any leg-wear underneath.

Trish is first introduced as a spoiled, selfish girl; this is later revealed to be a way to hide her insecurities, although her self-doubt is still apparent in instances such as expressing her nervousness to Bucciarati whether she and her father would get along or not. Over the course of the time she spends with the group, a deeply loyal, determined side of her is revealed. When she discovers her Stand Spice Girl with the help of Giorno Giovanna, she comes to terms with her own power to defend herself and her new friends. She is also seen lightheartedly teasing and joking around with Guido Mista towards the end once she is comfortable around him, implying that this is her true nature.

Spice Girl is a close-range Stand with considerable strength. She was able to use a pipe to stab and section Notorious B.I.G into pieces in an attempt to destroy it and could break off the front of a plane by rapidly punching the walls and roof of the cabin. Moreover, it has the power to Soften things, making them moldable like rubber. Her softening power enables her to take advantage of Trish's surroundings easily. 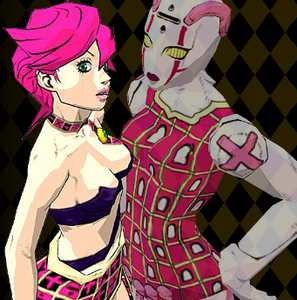 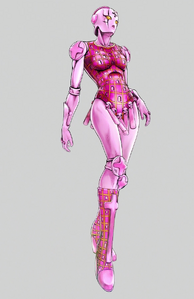 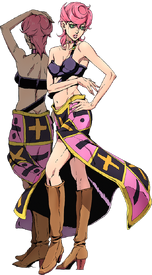 Retrieved from "https://hero.fandom.com/wiki/Trish_Una?oldid=1986780"
Community content is available under CC-BY-SA unless otherwise noted.