Sorceress, Member of the Lodge of Sorceresses

Free all sorcerers and sorceresses from Novigrad, Help Geralt and Ciri defeat the Wild Hunt

Triss Merigold is one of the main protagonists of the video game series The Witcher, and a supporting protagonist in the novels. She is a Temerian sorceress who hails from Maribor and a member of the Lodge of Sorceresses. She is one of the many lovers of Geralt of Rivia and both a good friend and love rival of Yennefer of Vengerberg.

She is voiced by Jules de Jongh in the first game and Jaimi Barbakoff in the sequels. In the 2019 Witcher series, she is portrayed by Anna Shaffer.

She was friends with Yennefer and the witcher Geralt of Rivia, but also unhappily in love with the latter. Triss took care of Ciri at Kaer Morhen for some time and is like an older sister to her. It was through her intervention that Ciri was not subjected to harmful hormone changes at Kaer Morhen, stripping her of her secondary gender traits.

She was a skilled healer and carried with her many magical potions, but she never uses them on herself because ironically, she was allergic to potions. She was also quite a powerful mage, certainly when it counted most. She wore an amulet - sapphire overlaid with silver.

While seemingly sweet-tempered and heroic, Triss is not a completely selfless person, having taken advantage of Geralt when he had amnesia and attempting to have him for herself, despite knowing full well he's in love with Yennefer (whom he raised Ciri with). She also tries to use him several times for the Lodge's gain. 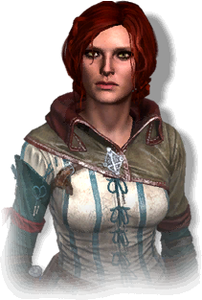 Triss in The Witcher 2. 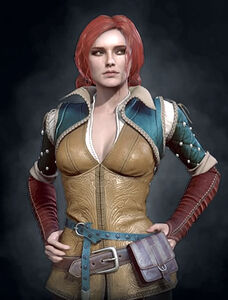 Triss in The Witcher 3. 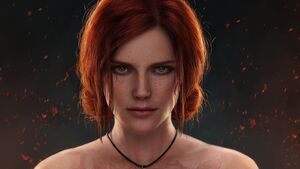 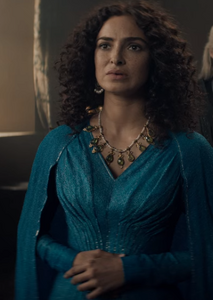 Triss in the 2019 The Witcher series.
Add a photo to this gallery
Retrieved from "https://hero.fandom.com/wiki/Triss_Merigold?oldid=1916281"
Community content is available under CC-BY-SA unless otherwise noted.