Troglokhan was created by Irwin Wayfair who was toy creator of company called Heartland Playsystems and then bought out by Global Tech. Industries. His partner's name was Larry Benson (the creator of the evil Commando Elite).

In the film, Troglokhan was destroyed by the Commando Elite, but he was reassembled by his fellow Gorgonite friends and his new name is Freakenstein. He was first seen in the whole movie as his regular self, but after the gorgonites rebuild him, he turns into...well, this. 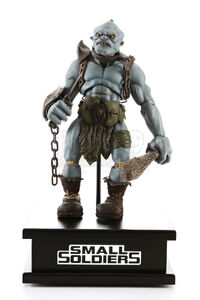