Personal command over the Servbots

Usage of a mech suit

On & Off Pirate
Tron Bonne (トロン・ボーン Toron Bōn) is a major character in the Mega Man Legends series. She is the only daughter of the Bonne family of air pirates. Though typically thought of as a villain, Tron has sometimes served in a heroic role, and is the star of her own game, The Misadventures of Tron Bonne.

She is 14 years old, 155 cm (5'1") tall, and weighs 43 kg. She is a genius mechanic that handles the design and construction of the Bonne's machines, including their airship, the Gesellschaft. She is also an able pilot, usually the one piloting fighting machines like the Gustaff, Feldynaught and Jagd Krabbe.

Tron created the 40 Servbots (due to the fact that the 41st Servbot was found randomly one day) that assist the Bonne family in various tasks, like helping Tron build and maintain her machines. She can be very harsh with the Servbots, sometimes even punishing them in a painful way, but despite this, Tron is usually tender and affectionate towards them, like a mother.

In Japanese, she is voiced by Mayumi Iizuka (who also voiced Misty, Cure Empress, Makoto Sawatari, and Mia Fey) in all of her appearances. In English, she is voiced by Caroly Larson in The Misadventures of Tron Bonne and the Mega Man Legends series and Tara Platt (who also voiced Temari, Mitsuru Kirijo, Wonder Woman, and Mervamon) in Marvel vs. Capcom 3: Fate of Two Worlds and it's updated and enhanced remake Ultimate Marvel vs. Capcom 3.

The Misadventures of Tron Bonne

Tron Bonne is on the Gesellschaft with the Servbots, while Teisel and Bon Bonne go to the Nakkai Ruins to get a refractor called "Diana's Tear". However, Tron loses contact with them and goes to their last known location. She arrives, only to discover the broken Gustaff and some of the Servbots crying. They then tell her that Teisel and Bon have been captured by Glyde, Lex Loath's henchman, and they need to pay a million Zenny. Tron starts stealing products and items for the debt for Lex, who then tells her that he needs 2 million Zenny and Glyde escorts her out. Tron proceeds to get the 2 million Zenny and returns to Lex, only to get captured and sent her to the dungeon where Teisel and Bon are being held. She contacts the Gesellschaft to start Plan #0024 and the Favorite Servbot is chosen to rescue Tron, Teisel and Bon. He rescues them, dealing with Glyde near the Colossus. They retreat back to the Gesellschaft and order the Servbots to open fire at the Colossus, but their weapons are not effective on it and it fires a blast at the Gesellschaft, causing it to lose 50% of its power, knocking Teisel overboard and injuring Tron in the process. The Favorite Servbot proceeds to attack the Colossus and destroy it, getting the Golden Refractor. Tron promptly hands Lex and Glyde over to the police to make sure that they won't cause any trouble again, thus preventing a rookie officer named Denise Marmalade (who Tron had met while on her earlier stealing spree) from getting fired by her captain. Back on the Gesellschaft, Tron discovers that the Favorite Servbot has accidentally thrown the Golden Refractor away. She and Teisel freak out and make an impromptu pit stop to search for it. At this point, the events of Mega Man Legends take place.

Tron debuts a playable character in Marvel vs. Capcom 2: New Age of Heroes, where in the arcade version, she is one of the 28 more characters unlockable, while in the home console editions (Dreamcast, PlayStation 2 and Xbox versions), she is one of 24 characters initially unlocked from the start. In the Xbox 360 and PlayStation 3 versions, she is unlocked from the start with the 55 other playable characters.

Tron and the Servbots appear in Project X Zone, where they join forces with a multitude of heroes (among them being Mega Man X and Zero) to stop a mysterious organization known as 'Oros Phlox' from taking over the multiverse.

Tron appears in Super Smash Bros. Ultimate as a advanced primary grab spirit. Her spirit battle is on the Wuhu Island stage on Talon Rock portion against Wendy Koopa and two tiny R.O.B. that represents the Servots. 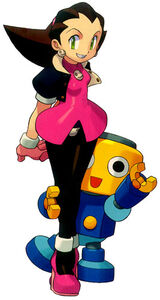 Artwork of Tron by Hideki Ishikawa. 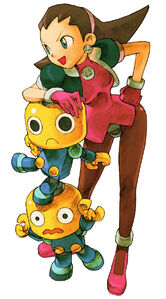 Tron in Marvel vs. Capcom 2: New Age of Heroes. 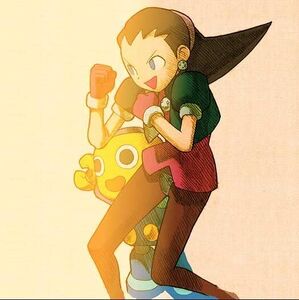 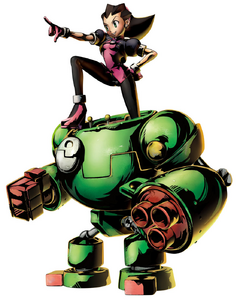 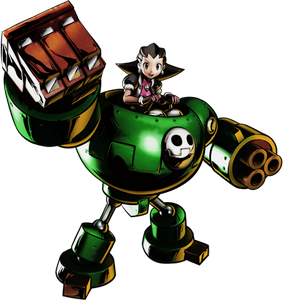 Tron as she appears in Mega Man Legends 2. 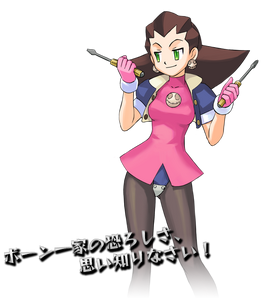 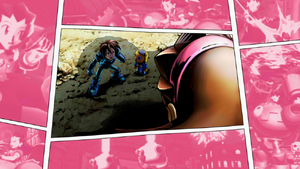 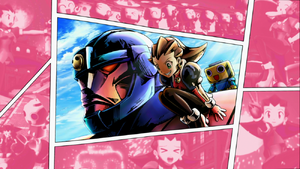 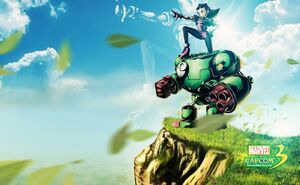 Wallpaper of Tron from Marvel vs. Capcom 3: Fate of Two Worlds. 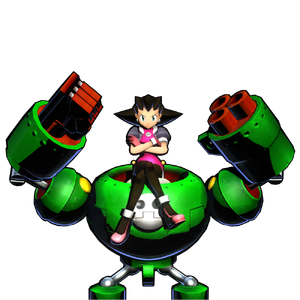 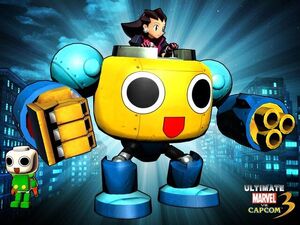 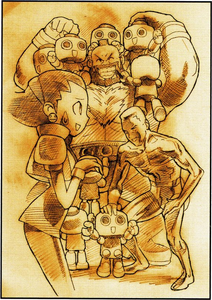 Tron and the Servbots with Iceman and Zangief. 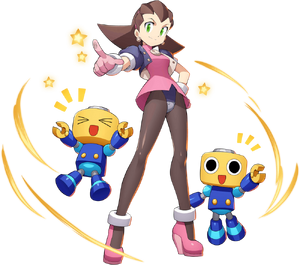