No information
Trouble Shoes Clyde also called Trouble Shoes is a minor hero in My Little Pony: Friendship is Magic.

He seem to be an outlaw who love to make trouble by ruined every Rodeo from other town in Equestria, and was the most wanted pony in all of Equestria, so one night Apple Bloom,Sweetie Belle and Scootaloo decide to go find him and wanted to capture him.So, they go to his house to find him, but he wasn't there yet and when he finally get home the three fillys and him get scared, he fall by cluzyness.

So he told them that he can offer them a drink, but his freezer is unfortunately now broken, when they finally free him from the rope, he was surprise to see that these three Fillys  was in his house, he wanted to get them out of his house, but he see they doesn't know the way to go back after they been lost, he decide to show them the way, on the road he tell them his story, as a foal he loved Rodeo and wanted to participate, but because of his cutie mark who he think it was bad luck it ruined his chance.

But Apple Bloom discover the truth and it was not bad luck, but the jury think it was funny and was supposed to be a Rodeo Clown, before the other finally realized the truth he's captured by the sheriff who was call by Applejack and Braeburn, who was thinking the three girls got kidnapped by him, the three fillys tried to tell them they might make a mistake, but Applejack tell Braeburn to take the fillys home and Trouble Shoes is sent to jail.

Later, after The Sheriff left because Apple Bloom make him leave the three fillys free him, they told him to disguise himself as a Rodeo Clown, he doesn't understand , but they told him who he was suppose to be, he decide to go and see that the kids was right, but he accidentally revealed himself just after, but when the fillys defend him from the people who want to turn to a angry mob, they explained that it was a misunderstanding and what happen to other Rodeo was just simple accident.

So, he got clear off of all charge, after that the fillys finally told the truth they get punished by Applejack who told them to clean the mess that he make, but atleast they help him realise his dream and he was talking with other Rodeo clowns, the Cutie Mark Crusader realise that they we're happy to have helped him, but that their punishment is still going more to their annoyance. 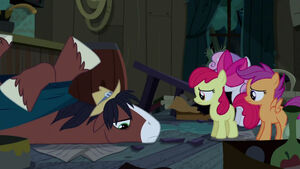 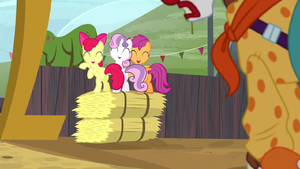 The Crusaders laughing at Trouble Shoes.