No information
Truffles is the wife of Mung Daal and an anti-hero in Chowder.

She is voiced by Tara Strong, who also voices Timmy Turner from The Fairly Oddparents, Rikku from the Final Fantasy X series, Omi from Xiaolin Showdown, and the Injustice version of Harley Quinn.

Truffles has been the waitress of Mung Daal's Catering Company for at least 386 years, and she has been married to Mung Daal for 450 years.

Truffles is a short and obese mushroom fairy with green eyes, glasses, light-blue hair, and a green dress. Despite calling herself beautiful with a perfect body, several characters, including Chowder and Shnitzel, view her as a scary monster. Even Mung himself refers her as a Majungasaur. The mushroom on her head is actually a hat, and hides her bald spot from customers to keep them from running.

As a girl and a young woman, she had a sweet and caring personality. However, as an elder, her soft side turned sour. Truffles has a short-tempered personality, always complaining about anything off. She would even take days off from the kitchen to get away from the racket her husband and chefs create in the kitchen. Despite having an angry personality, she does love and care about her husband, Shnitzel, and Chowder, and does anything she can to keep them in a good mood (and busy). 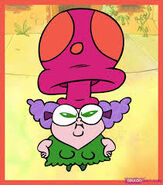