Scythe fighting (it is half scythe, half flail)
Turning into a weapon

Spending time with Black☆Star and her other friends

Tsubaki Nakatsukasa is one of the main protagonists in the anime/manga series Soul Eater and is Black☆Star's weapon partner. Tsubaki is loyal to her partner despite his incompetence, and allows herself to be dragged into his antics, even encouraging him when she would know better and be more reasonable otherwise. Despite her willingness to participate in Black☆Star's foolhardy endeavors, Tsubaki is well aware of his foolishness, and will apologize on his behalf when he causes too much trouble. For these reasons, she can be seen as a foil for Black☆Star.

Tsubaki is a tall, attractive and rather well-endowed girl of Japanese descent of around sixteen or seventeen years old. She wears a pale yellow, sleeveless outfit with a skirt end that has a slit down the side with a bright yellow star emblazoned on the right side of the chest. She also wears a dark brown scarf and a tight dark brown stocking on her right leg starting just above the knee and white boots. She wears a sash that looks similar to Black☆Star's grey riveted straps that wraps around her waist twice and hangs down diagonally from right to left. She has long black hair tied up in a ponytail and large indigo eyes. Occasionally, like when she is bathing or playing basketball, her ponytail and the strands of hair at the side of her face are tied up into 'loops.' Upon using the Uncanny Sword, her hair is loose, with tattoos that are the same pattern as Black☆Star's. She wears grey and black bandages on her arms from the shoulder down, and wears a sweatband with a star symbol on it on each of her wrists.

Upon joining Spartoi, Tsubaki's attire has changed completely. Like Black☆Star, she now wears a sleeveless white top with stitches going down the middle and a black scarf around her neck. She now wears blue shorts tied with a black belt, with a small pouch attached marked with a star symbol. Like Black☆Star, she wears white bandages on her arms below her shoulders, although some black bandages can be seen near her shoulders too. On her right leg, she has a long plain back stocking, whilst on her left, she has several black bands wound around her leg. Her shoes are also black, unlike the rest of the Spartoi members, who wear white shoes.

When she is transformed into a male in the Lust Chapter of Book of Eibon, she has a very masculine build, tall and muscular, resembling her older brother Masamune. She is dressed in a black Japanese-like tunic and has bandages on her arms like Black☆Star. Her bangs are spikier although her ponytail still remains, but it is tied lower down her head unlike in her original female form, similar in the manner of her father and Masamune.

Tsubaki's soul is pale yellow in color and has her long ponytail as the 'tail' of her soul. At one time, the end of the tail resembles the blade of her Chain Scythe form. Tsubaki has a wide variety of Weapon forms. When she is transformed into a male, her Weapon forms change a little to match her new masculine appearance.

As one of the oldest of the main cast of characters, Tsubaki is one of the most mature characters, along with Maka. However, she is not as short-tempered as the Scythe Meister, and is very patient and forgiving. She, like Maka, demonstrates a much more practical and level headed personality than most of the other characters. She has a very magnanimous, polite and gentle personality and always tries to help or comfort her friends even when she has no idea how to help. She is caring and understanding and sometimes acts as the mediator when her friends fight, and her understanding and insight sometimes makes her the agony aunt figure for people who are troubled. She cares deeply for her friends, and does not seem fond of things that might make them upset, even going so far as to suggest to Soul and Black☆Star to nullify the dare Maka has to do after she loses the basketball game, due to not knowing the rules. She often worries about her friends if they are in danger, and is upset when the people she cares about are hurt.

Tsubaki's soul is 'very co-operative and has a lot of space to accept people' as said by Stein. Because of her accepting nature, she can see the good in people who, at first glance, do not seem to have anything likeable about them (such as with her partner, Black☆Star, and Mifune, even though he had joined Arachnophobia). She deeply cares for her friends and prefers to avoid unnecessary conflict, usually being the one who diffuses any arguments between people, making her a dependable and trustworthy friend. Her patience often makes her the only calm one (apart from perhaps, Soul) in situations when everyone else has lost their temper. Even in the Wrath Chapter of the Book of Eibon, Tsubaki only briefly loses her temper, whilst everyone else is shouting and screaming at each other.

She is also generous and kindhearted, up until the point that some people even take advantage of her (Liz does this twice, once in the anime when she asks her to do an essay for her and another time when Liz pretends she cooked Tsubaki's food in order to impress a boy she likes). Her tendency to trust people at all times also hinders her once on a written test at the Shibusen, when she fails to see a trick question. She also has a habit of apologizing, even when it isn't her own fault (something which she often does when Black☆Star does something wrong in front of people). One of the most mature and flexible characters, Tsubaki is very amicable and gets along well with her peers and can be very understanding of their feelings.

However, some people, like Masamune, accuse her generosity and capacity by calling her a pushover, saying that she does not have the ability to show her true feelings or deny something that she thinks is not true. As a child, Tsubaki had a habit of pretending that she liked certain things in order to please others, such as when she told Masamune that she wanted to play ball when she really wanted to play house. She does suffer from low self-esteem at the start of the series, comparing herself to the camellia flower, a 'flower without a fragrance, blooming silently and looking tragic when its petals scatter.' She can also be a little submissive and reluctant to be direct.

However, her confrontation with Masamune allows her to mature and be more confident with herself, and she denies that she is a flower without a fragrance, and proves it to her brother by defeating him. She learns to be more honest with herself as the series goes on. When the situation calls for it, she will put her foot down, and can be as determined and as stubborn as Black☆Star himself. She refuses to use the Uncanny Sword when she thinks Black Star is too injured to keep on fighting, and also shouts at Maka and Soul to stop them from fighting with each other during the battle againstFree, showing that she has grown more assertive. She still can be easily embarrassed, and can sometimes be paranoid and takes things too literally, shown in the Salvage chapter, and her reaction when Maka sarcastically suggests that Black☆Star and Soul be partners since they seem to be such close friends.

Despite being on the calm and accepting side, she still knows when to draw a line, and can be as punishing as Maka when someone, especially her partner, does something inappropriate, such as spying on her while she is bathing (her usual retaliation is throwing a shuriken into Black☆Star's head, resulting in a gush of blood). Due to her overall serious nature, she still shows some dismay and shock alongside Maka when the other characters do something ridiculous.

She seems to have a talent for cooking, having been complimented on a few occasions by her friends. She doesn't seem to mind cooking even for big-eaters like Black☆Star and Ragnarok; mostly because she thinks it is worth cooking for someone with such a big appetite. She is also very domestic, saying that she likes cleaning as well. AbBlack☆Star once leaves her to clean the entire library at Shibusen in his stead, something which she happily does.

During the Salvage mission, her personality does not change that much, even though she is male. She is still rather quiet and polite, but develops the masculine weakness for women, showing with her reaction when Black☆Star inadvertently rests his (well-endowed and feminine) chest against her shoulder. It is revealed that, despite her quiet personality, Tsubaki is the most lustful of Spartoi group present, just topping Liz and being just below Blair, something which embarrasses her to no end.

As a Demon Weapon, Tsubaki possesses the ability to transform at will and, in addition to this, has an special advantage over other Demon Weapons due to being a High Performance Multi-Form Weapon, as she can transform into more then one weapon type.

Other Skills and Abilities 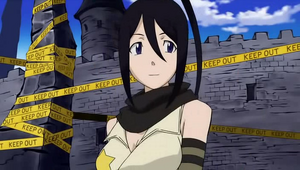 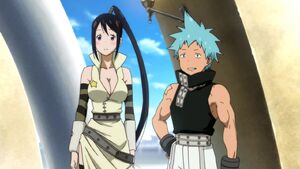 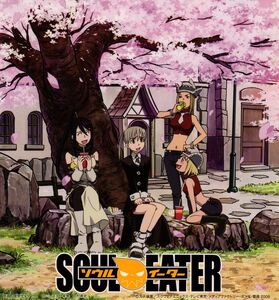 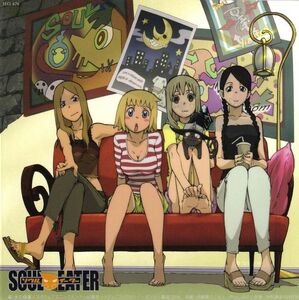 Maka and her friends 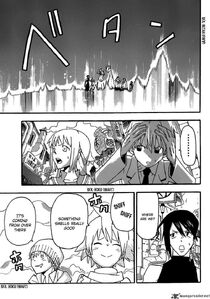 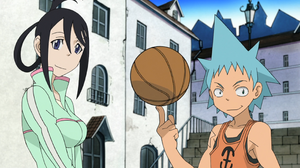 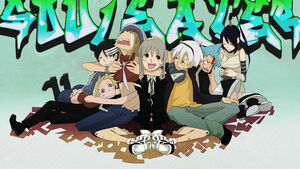 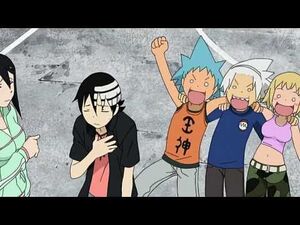 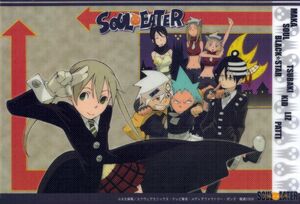 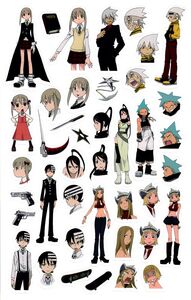 Retrieved from "https://hero.fandom.com/wiki/Tsubaki_Nakatsukasa?oldid=2167724"
Community content is available under CC-BY-SA unless otherwise noted.