Tsugumi is a supporting protagonist in the anime series Guilty Crown. She is a hacker working for Funeral Parlor and is the partner and best friend of Ayase Shinomiya. At fourteen years old, she is one of the youngest members of the group, who tend to be seventeen years or older.

She is voiced by Ayana Takeatsu in the Japanese version and Monica Rial in the English version.

Tsugumi is of average height for her age (14), standing at 160 cm (5'3). She has a black hime cut hairstyle, and a cat like smile and grayish-blue eyes. She is always seen with an electronic headband that resembles "neko" ears.

She is first seen at the temporary base of operations in a Funeral Parlor trenchcoat attire. When engaged in battle, she is seen in a hologram hub wearing a dark blue and gray plugsuit supervising the battlefield and Ayase's vitals. After the Second coming of Lost Christmas, she normally dons a maid outfit or school uniform.

Tsugumi expresses a very cheerful and energetic personality. She is very brash and cheeky and speaks unreservedly even to the leader, Gai. Her catchphrases are: "Aye!" (roger), and "Nay!" (negative). Due to her young age, she can be quite bratty, frequently teasing her friends, particularly Ayase over her feelings for Gai. Nevertheless, she cares deeply for Ayase, and saves her life by pulling her out of her Endlave on more than one occasion. She has a tendency to give nicknames to her closest friends, referring to Ayase as 'Aya' and Inori as 'Inoreen'.

Tsugumi is very playful due to her young age; she uses her interface as though she is playing as a video game, and refers to Funnel and other robots as her 'toys'. She seems to have a great fondness for bunnies, as she is seen playing with a rabbit stuffed toy in a flashback and also wears a maid uniform with bunny ears when she and Ayase go undercover in Tennozu High School. She can also be rather blunt and lacking in tact, such as when she states that Arisa doesn't have what it takes to be a leader, which gets her scolded by Souta. Tsugumi is extremely confident in her hacking abilities, even telling Shibungi during the final battle that there wasn't a single time she had ever let him or the others down.

Beneath her energetic nature, however, Tsugumi is quite a lonely girl, which can be explained by her being orphaned when she was very young. She claims to have gotten used to being alone, since she has been for as long as she can remember, but there are various hints that she's just lying to herself. The most obvious hint is her Void, which has the ability to create realistic duplicates of herself or any other person, though these are generally used as expendable decoys. She is shown to cherish her friends a great deal; when Ayase scolds Tsugumi for cutting her connection to her Endlave and claims she didn't care if she died to save Gai, Tsugumi is hurt and says that she couldn't deal with losing her. She is also deeply saddened when she learns of Oogumo's sacrifice and is delighted to see Shibungi alive when he escapes from GHQ.

Tsugumi is notably one of the few people who is strongly against having her Void drawn, to the point that Shu has to have several people restrain her to draw it for the first time. She even goes so far as to call it an invasion of her privacy. Nevertheless, she considers her Void to be really useful, even bragging about it when the group use it to trick GHQ and prove to the students that they can't be trusted.

Not much is known about her early life other than that she appears to known Ayase very well and appears to be a personal friend of hers. She was deeply affected by the GHQ and their authoritarian rule and control of Japan and joined Funeral Parlor in order to help save her home country from tyranny.

Events of the series

During the events of the series, Tsugumi is first seen in a ghetto where Gai Tsutsugami is and she briefly interrupts his conversation with Shu Ouma to take back Fyu-Neru from Shu and walks away. She then appears again where she is overseeing the deployment of Anti-Bodies Personal as they begin to eradicate and whip out the local population and begins to help support Ayase during the battle. She eventually bails her out after Daryl shows up and almost kills her. She eventually gets rallied up after Gai announced plans to save hostages that were about to be executed by the Anti-Bodies and becomes a friend of Shu after he joins Funeral Parlor. She helps him and his friends when he was going to a GHQ Airport to assist Gai and other Funeral Parlor members via Fyu-Neru and luckily survives when the Apocalypse Virus is released upon Japan again and devastates both Tokyo and the entire country.

After the outbreak, Tsugumi and Ayase regroup with Shu and Inori and stay at Shu's High School where other survivors are staying at. The dress up in school uniforms to blend in and they manage to fit in for a time being but things soon get bad. The school begins to turn on each other and the two of them are found out to be Funeral Parlor members and are captured by a group of students. They are soon brought before the Auditorium stage where they are tied up and gagged and are facing a mob. Tsugumi is held at gunpoint while Ayase is being assaulted when Shu manages to intervene and saves them. She then uses her void and makes copies of herself, Ayase, Shu, and one of her captures and they witness the holograms being gunned down by GHQ Security revealing how they want to slaughter all of them. 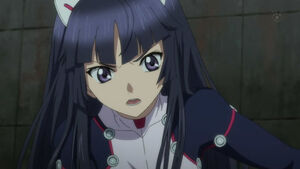 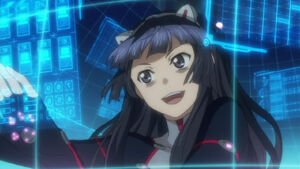 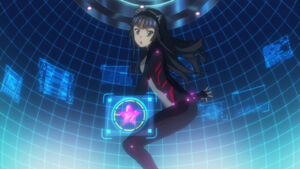 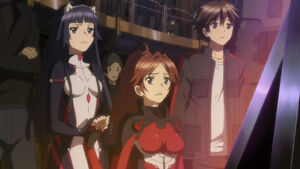 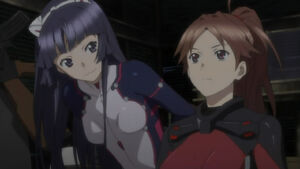 Tsugumi hanging out with Ayase 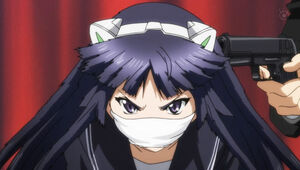 Tsugumi captured and gagged
Add a photo to this gallery

Retrieved from "https://hero.fandom.com/wiki/Tsugumi_(Guilty_Crown)?oldid=1640499"
Community content is available under CC-BY-SA unless otherwise noted.