Learn how to control her weapon form better

Insecure teenager
Tsugumi Harudori is the main protagonist of the spin-off manga/anime series, Soul Eater Not!. She is a transfer student from Japan and a Freshman at Shibusen who at first can not transform into her Weapon form. After befriending with two girls named Meme and Anya, she sometimes runs into some problems, as they both want to be her Meister, and soon, she has a male Meister interested in her as well. She is part of the NOT Class of the DWMA, meaning she is not as powerful to be a combatant like Maka and her friends.

Tsugumi is a shy, easily and excitable girl, having come from a cozy life, Tsugumi still finds it a little hard to adapt to the DWMA, a place chock-full of strange things & people steeped in the supernatural. Out of all the Shibusen students, she is shown to be the most normal if not mundane, because of this she is slightly reluctant around people she's not aquainted with and can get frightened or very nervous easily. She is also embarrassed very easily, often blushing. She is rather naïve and believes (and fears) in the supernatural as she believes Kana Altair's tarot card readings straight away. This is rather ironic as she is a Demon Weapon, a person with the supernatural ability to transform into weapons. She occasionally retreats when things get too much for her, but after meeting Maka and getting encouragement from Sid, she manages to be more confident, and although still a little passive, can still pluck up her courage and stand up for herself when it really matters.

Tsugumi is kind-hearted, polite and friendly towards other people, smiling almost all the time, trying to please everybody. Beyond her nervousness, she proves to be enthusiastic in everything she does and tries her best at all times, shown when she puts a lot of effort in working at the Deathbucks Cafe, and is quite modest as well. She dislikes violence and sometimes tries to diffuse an argument or tell a person to not be so mean. She values friendship greatly, and is eager (albeit slightly nervous) at the concept of having a Meister partner in Shibusen. She states that she forgets all of her troubles whilst being with her friends. Despite having two people wanting to be her Meister, she makes a great effort to try and be both of their partners and make sure no one is left out. She is prone to looking up to people as idols and trying to become like them, even going as far as to imitate her idols' physical appearance (she ties up her hair into pigtails after meeting Maka).

She also describes herself as 'in love with love,' showing that she is a dreaming romantic. When it comes to romance, she has a bit of a wild imagination and is prone to daydream a little, although she tries not to take her daydreams too far. She at first, dreamt of being in the middle of a love triangle between two cute boys who both wanted to be her partner, and was a bit disappointed when she ended up having two girls wanting to be her partner instead. She is shown to be slightly more nervous around boys such as Akane and Clay.

Rather like Maka, Tsugumi has a rather undeveloped physical build, and she seems to suffer from slight low self-esteem because of it. She picks her specific Shibusen uniform because it obscures the shape of her body, and she takes comments such as 'flat-chest' very much to heart, getting depressed when called so. When Akane calls her 'cute,' Tsugumi stubbornly replies that she is not. Because of her low self-esteem, she envies other girls and their physically attractive traits, such as Meme's rather well-endowed chest, and Anya's thin legs. She also questions her abilities as a Shibusen student, as she admits that she has never experienced any hardships and is easily scared. But despite it all, she never allows herself to mope around and always tries her best instead of letting it get to her.

Tsugumi Harudori is a young girl of Japanese descent, with a short, petite frame, and a fair skin-tone. She has shoulder-length, black hair, and indigo eyes. Her hair is stringy, with short, choppy bangs with a tuft on top, long eartails, and pigtails on the sides of her head. Later, she puts it in a pigtailed style inspired by Maka Albarn. This style features the classic pigtails still retaining her side bangs with her pigtails have two ponytails instead one and her har isn't completely tied with loose strands still hanging. The hairstyle also has the same ruffle of hair as mentioned before. She later change's this from time to time by smoothing down all of her bangs and tying her pigtails so that they fall to behind her neck.

Her standard attire constis of black colored sailor fuku adorned with a white sailor collar with a black stripe running through it and a white tie of which ends in the shape and style of Shinigami's mask. She has a black jumper beneath a black vest and her skirt is black and gray with an argyle print with white trimming. She wears a pair of black knee-high boots over black pinstripe knee-high socks. She, like Maka is also shown not to be as "heavenly gifted" as other girls.

When working part-time at Deathbucks Café, she wears its waitress uniform. She wears a small cap in the shape of Shinigami's mask, along with a dress shirt with puffy shoulders tied and black ribbons along with a large extravagant polka dot bow tie. Above that, she wears a well-fitting black dress held up with suspenders, tied with a ribbon behind her back and with cross-stitches on the front. The skirt fans out at her thighs and has a white stripe going across the bottom. She wears white knee-length stockings and black shoes.

In Weapon form, Tsugumi transforms into a halberd, made up of a long slender haft tipped with an arrow-shaped spearhead. Below the spearhead is a blade that is curved like a short scythe on one side, and a small axe-blade on the other. In the middle of the blade is a small, lavender, X-shaped form. 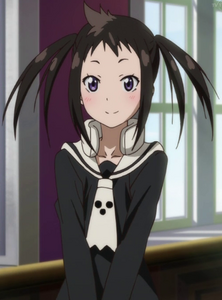 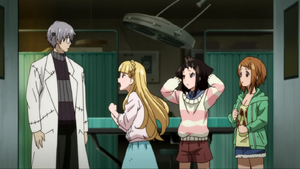 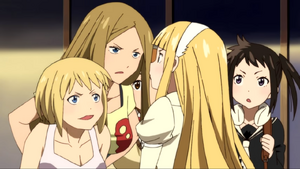 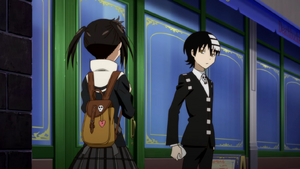 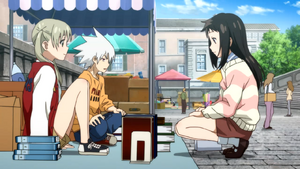 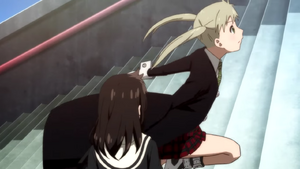 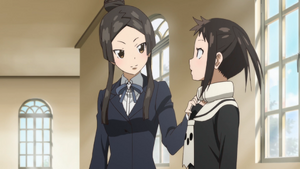