Cooking (though she is bad at it).

Tsugumi Sendo is a heroine in the Fatal Fury video game series. She is a female high school wrestler and one of the two original characters in the game, along with Toji Sakata.

Tsugumi Sendo is a high school student in Osaka who was wrestled by her father Kantetsu from an early age. However, she was ashamed of this, especially after a boy told her that her obsessive woman wrestler was "non-female" and wanted to withdraw from her wrestling training.

After confronting her aggressive father, Kantetsu will allow her to drop out, but only if she won a decisive victory in the King of Fighters tournament. Although she initially hated wrestling, however, she began to enjoy the battle when she started to win the matches.

Some of Tsugumi's mobile names refer to her hometown, such as "Tsūtenkaku Driver", "Naniwa Lariat" and "Okonomiyaki-Ire".

Tsugumi is a young female wrestler who wants to prove herself in being a strong and tough fighter. She is cheerful and friendly, but has a passion for fighting, so she can challenges every fighter she sees. 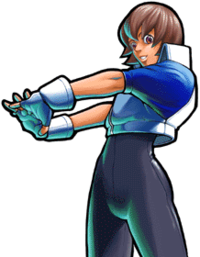 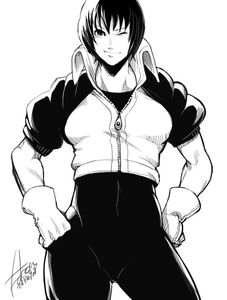 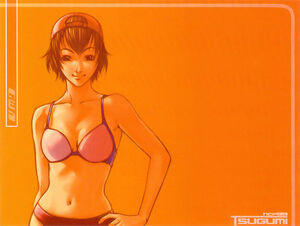 Retrieved from "https://hero.fandom.com/wiki/Tsugumi_Sendo?oldid=1618387"
Community content is available under CC-BY-SA unless otherwise noted.