Member of the Resistance

Spending time with Geiz and Sougo.

Supporter
Tsukuyomi is a member of the Resistance from the year 2068 and one of the main characters of Kamen Rider Zi-O. She initially has no memory of her past, but she is eventually revealed to be named Alpina and to be a member of a royal family of time manipulators.

Tsukuyomi was later revived and currently lives in 2019 as Alpina Tsukuyomi after Sougo rewrote the timeline.

A member of a royal family from an alternate timeline, after Alpina's older brother Swartz was passed up as heir and she was instead appointed "Queen", Swartz erased her memory and dumped her in a timeline ruled by the Demon King Oma Zi-O. There she was taken in by a Resistance cell led by Woz and given the code name "Tsukuyomi".

However, in 2068, the Resistance was betrayed by Woz, who defected to Oma Zi-O's forces and supplied them with faulty info in order to lure them into a trap where Oma Zi-O destroyed most of the Resistance members with minimal effort, Tsukuyomi was saved from being killed when she was pushed into a rift by the captain of the Resistance.

Tsukuyomi later followed fellow Resistance member Geiz Myokoin to 2018 to meet Oma Zi-O's past self, Sougo Tokiwa. Unlike Geiz, who intended to kill Sougo to prevent the bad future, Tsukuyomi sought to prevent Sougo from going down the path of becoming a Demon King.

The Birth of Zi-O

Tsukuyomi saved Sougo from Geiz and showed him how in 50 years he would become the most evil ruler all of history. Despite this, Sougo still obtains the power of Zi-O from Woz though he declares he will use it to become the most good and beloved overlord in history as opposed to the Demon King.

Unlike Geiz, Tsukuyomi was unconvinced at first that Sougo could become the Demon King. However, after Sougo obtains the power of Zi-O II, Tsukuyomi begins to become more distrustful and wary of Sougo, though regains her confidence in him after traveling back in time and discovering Swartz's involvement in Oma Zi-O's birth.

After Sworz changed the timeline to one where Hiryu Kakogawa reigned as Oma Zi-O in order to draw out Tsukasa Kadoya, Tsukuyomi along with Geiz lost her memories of her time with Sougo and became a member of a Resistance opposing Hiryu Kakogawa/Another Zi-O II. She encountered Sougo when he was sent back to the timeline and initially believed him to be an enemy due to him also being Zi-O, though began to doubt this was the case after Sougo assisted them in fighting off Hiryu's Another Riders. She later was abducted by the Time Jackers and brought before Swartz, who revealed himself to be her older brother and their true origins as members of a royal family before stealing her time powers to add to his own. Woz attempted to stop him, but Swartz flung him into a wall. After Tsukuyomi was drained of the last of her time power, Woz swept her into his scarf and teleported away with her.

After Sougo as GrandZi-O defeated Another Zi-O II, Tsukuyomi and Geiz's memories returned to normal and the two became friends with Sougo again. 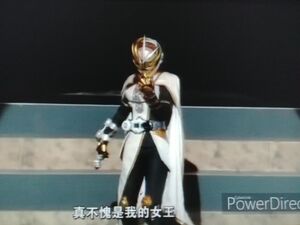