Tsumugu Kinagase (黄長瀬 紬 Kinagase Tsumugu?) is the main character and an anti hero in Kill la Kill. He is a member of Nudist Beach. He aims to purge the world of Life Fibers, after an incident involving his sister losing her life.

Tsumugu is a tall, muscular man, possibly in his early or late twenties. He keeps his hair short and black with the exception of his bright red mohawk. He has thick eyebrows, two earrings in his left ear and a bandage on his nose. In later scenes, he is shown with his eye blue. His attire is reminiscent of a guerrilla army member's gear in that it consists of a high-collared vest and dark green pants draped with belts and ammo. It is worth noting that he shares a physical trait with Ryūko Matoi - namely, the black hair with a red streak.

Tsumugu has a keen hatred for Life Fiber uniforms, especially Kamui, as he believes that they are merely relying on their wearers as a food source and will eventually kill their wearer. He also does not respect anyone who relies on Life Fibers. However, despite his hate for Kamui, Tsumugu accepts that Senketsu truly cares for Ryūko after being threatened by him and chooses to save them from Nonon Jakuzure when they were cornered by her.

He is a very serious and focused individual, and has a habit of listing two reasons that apply to any given situation (usually a mistake done by his given opponent) and is frequently seen smoking.

In the past, Tsumugu used to work under Isshin Matoi as a scientist in the research of Life Fibers, together with his older sister, Kinue, who was very close to him. When Kinue, believing that people and clothing can form a bond together, decided to become a willing test subject for the wearing of an unspecified Kamui, the test failed tragically as Kinue was overwhelmed by the Kamui and devoured right in front of Tsumugu's eyes. This incident sparked in him an intense hatred for Life Fibers and Kamui and his initial belief that clothing and people can never truly care for one another, resulting in him becoming a hunter for Nudist Beach.

Tsumugu is shown to be very tough, as he is able to hold his own against the Goku Uniform-clad club leaders without wearing any ability-enhancing clothing himself. He fights with equipment capable of disabling anything composed of Life Fibers. He most frequently uses a sewing machine shaped gun that fires alloy-based acupuncture needles that are shaped like sewing needles that can cause Life-Fiber-based clothing to desynchronize with their wearer. He also uses thread spool shaped grenades and smoke bombs to cause collateral damage, and is equipped with special firing pins mounted in gauntlets on his wrists. The pockets of his military vest can also function as a large-scale smoke bomb.

Tsumugu is very skilled at setting traps, disabling his Life-Fiber-using opponents, and stealth tactics, being capable of incapacitating Ryūko while in "Kamui" mode Senketsu through his tactical aptitude. 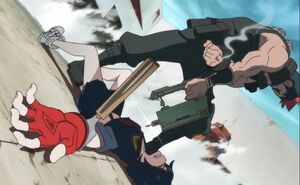 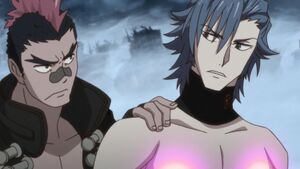