Insecure Heroine, Incompetent Dimwit, Comic Relief
Tsuzuri Tessou is a character first introduced in A Certain Scientific Railgun and is a recurring character of the series. She is a member of the Academy City security organization Anti-Skill and is a subordinate of Aiho Yomikawa, but is very incompetent and bad at her job.

Tessou has long green hair which is often shorted down by having it put in a ponytail. She also has lime green eyes and wears glasses over them. Her usual attire consists of a blue vest with dark blue shirt and pants with black combat armor with the Anti-Skill emblem placed on the front whenever she is in combat and has a tan dress as her civilian cloths and wears the blue vest whenever she is out on patrol. Tsuzuri appears to be rather young as if she were in her 20s.

Tsuzuri is a very kind hearted, nice, and well-intentioned individual wanting the peace and security of Academy City's citizens. Tsuzuri is very clumsy and dimwitted on countless occasions and is incompetent as a member of Anti-Skill. Despite this, she is still deployed into combat zones and even fired her weapon while closing her eyes closed. 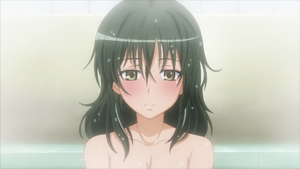 Tsuzuri in the bath 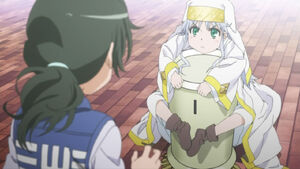 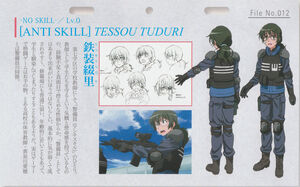 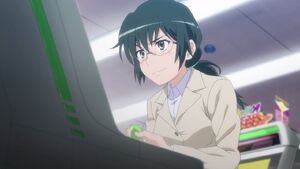 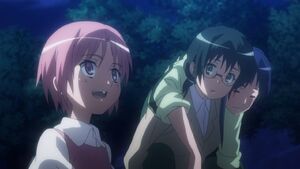 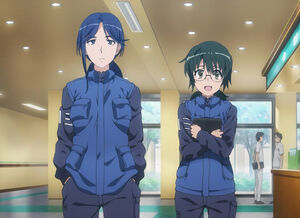 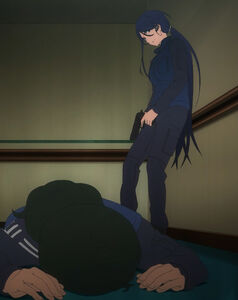 Tessou screwing up
Add a photo to this gallery
Retrieved from "https://hero.fandom.com/wiki/Tsuzuri_Tessou?oldid=2107983"
Community content is available under CC-BY-SA unless otherwise noted.