Tucker "Tuck" Carbunkle is Brad's little brother from My Life as a Teenage Robot. He is at times the more cautious between him and Brad but not above listening to his elder brother. He hangs around with his brother and Jenny all the time.

Tuck is the young protagonist introduced in "It Came From Next Door." He has a hyperactive personality and can easily excited. He can be rather selfish and greedy but often learns a lesson from his previous mistakes. He seems rather paranoid at times throughout the series. 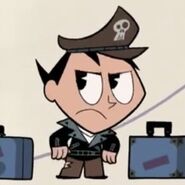 Retrieved from "https://hero.fandom.com/wiki/Tuck_Carbunkle?oldid=2042743"
Community content is available under CC-BY-SA unless otherwise noted.