Spending time with his family and Kirby

Tuff Ebrum is the tritagonist of Kirby: Right Back At Ya!. He is Tiff's younger brother and Kirby's other ally along with his sister. He can be stubborn at times, but he helps Kirby in his fight against Monsters.

Tuff is the youngest member of the Ebrum family. He is a crazy boy who lives in King Dedede's castle along with his older sister Tiff, his mother Lady Like, and his father Sir Ebrum. He often likes to tag along with his sister and is almost as fast as she is. Tuff isn't really the smartest one though; he's immature and often found getting into trouble. He's also very stubborn and rarely thinks before he acts. Tuff never means any harm, but his actions often have very annoying consequences. He often enjoys hanging around with a group of three Cappy kids: Spikehead, Iroo, and Honey. Tuff has also befriended Kirby.﻿

Tuff's appearance is a little different then the rest of his family. He has orange skin with dark olive colored shoes/feet. He has orange and green hair which is grown out way too much, covering his eyes completely. (Which are not seen in any of the episodes of the show.) He wears bright purple pants with kind of a jumpsuit-like red strap. 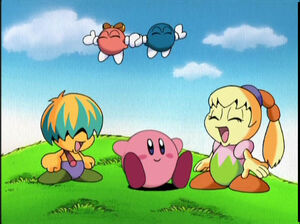 Retrieved from "https://hero.fandom.com/wiki/Tuff?oldid=1711782"
Community content is available under CC-BY-SA unless otherwise noted.