Leader of the Bears

He was voiced by the late Michael Clarke Duncan who also voices Sam from Cats & Dogs, Future Wade from Kim Possible: A Sitch in Time, and Commander Vachir from Kung Fu Panda.

Tug serves as the leader of the bears who live at the Salmon Run as such, he show deep care for all of the bears there, big and small. He also helps Kenai ease into the bear lifestyle.

Sometime before the events of Brother Bear, Tug apparently toppled a tree that was blocking the view from his cave.

Unfortunately, the tree in question was home to a family of chipmunks, which quickly took up residence in his home as retribution for the desecration of their old home.

Tug doesn't make an appearance until very late in the film. He is first seen at the Salmon Run, telling Kenai to stop screaming, as he is scaring off the fish. He then geets Koda, who asks Tug if he has seen his mother, to which Tug says that he has not.

When Kenai wishes to leave (as he wishes to go to where the lights touch the earth in order to return to his human form) and says that he doesn't belong at the salmon run, Tug tells him that every bear belongs there.

Tug and the other bears later tell stories to each other where Tug talks about the chipmunks living with him. When it was Koda's turn to tell his story and quickly talks of how he watch his mother fight in a life and death struggle against possibility the most fiercest creature on earth before asking whose turn was next, Tug asks to hear the full story to which Koda talks of how he got separated from his mother after she protected him from hunters (who were in fact a human Kenai and his brothers Sitka and Denahi). Following this, Tug expresses shock at the story.

Tug makes a brief appearance in in the sequel. Kenai and Koda meet Tug, and Koda says that he and Kenai are going to Crowberry Ridge to pick some berries.

When Koda starts naming the various kinds of berries that he and Kenai are going to eat, Tug slows Koda down and mentions that those are a lot of berries. Shortly after, a female bear calls for Tug, and Tug tells them that he has to go, and then leaves to be with his love interest.

Tug and his girlfriend later attend Kenai and Nita's wedding. 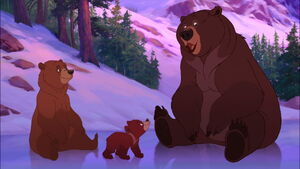 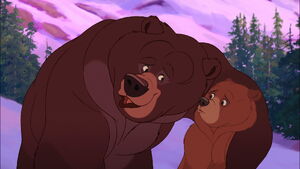 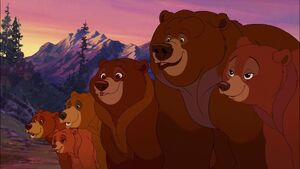 Retrieved from "https://hero.fandom.com/wiki/Tug?oldid=2317590"
Community content is available under CC-BY-SA unless otherwise noted.