Captain and pilot of the Planet Express spaceship

Going on adventures with her crew.
Hanging out and spending quality time with Fry.

Turanga Leela (b. July 29, 2975), better known as Leela, is the captain of the Planet Express ship and the overall deuteragonist of Futurama. She is a smart, strong, and level-headed woman. She is also the conscience of the group, and is often prone to nagging them and expressing her outrage at their various immoral actions.

She has been known to scrap missions on a whim at the promise of learning more of her past, jeopardize the crew's life to spite Zapp Brannigan, and save Nibbler, and have sudden emotional outbursts about an ex-boyfriend from her past named Sean. Although she doesn't often show it, she is in love with Fry, and vice versa. Leela was the first woman blurnsball player, and the worst player ever due to her poor depth perception. Later on, she finally met her long lost parents, who turned out to be sewer mutants.

Leela was abandoned as a baby and grew up in an orphanarium where she was often the target of bullying. For the longest time she believed she was an alien from an unknown planet, but later found out she was a sewer mutant native to Earth.

Leela is a tall, attractive, and muscular woman, with a single large eye that takes up most of her head. She has purple hair which she usually ties in a ponytail, and she has a long cow-lick that hangs from her forehead.

She dresses in gray knee-high boots, black stretch pants, and a white tank top. Leela also wears a Wrist LoJack-a-mater on her right wrist, and can occasionally be seen wearing a bright green jacket.

During her youth, Leela was often teased because she only had one eye. She felt very lonely in her childhood after being abandoned by her parents at an orphanarium, and always dreamed of learning who her real parents were. She eventually learns that she is a mutant, rather than an alien, which she had always thought she was. Leela has been shown to care a great deal about her mutant parents, even stealing a priceless Quantum Gemerald from a museum along with Bender and Fry, when the Zookeeper threatens to feed them to piranhas.

Despite her troubled past, Leela is friendly, smart and self-reliant, though she is sometimes impatient and quick to anger. She cares deeply for her friends and loved ones, plus issues she feels she must stand up for, like freedom, the environment and cute animals. However she does not hesitate to use force if she believes the situation demands it. She also has a liking for violence and was often sarcastic, but she nevertheless seems to have developed strong maternal instincts at times. She is engaged in a constant low-intensity feud with Amy Wong, the only other female at Planet Express, who more or less frequently accuses her of not being ladylike enough to be a true woman, despite Leela having a strong sensitivity for cuteness and romantic issues.

As a mutant, Leela has a peculiar metabolism different from that of standard humans. Mutagens cannot harm her, and she seems resistant to many poisons, environmental hazards and illnesses. Her special condition may have helped her fight off the threat by the Baby Space Bee Queen's poison, and it proved instrumental for finding the cure against the common cold that had New New York in its clutches.

As a recruit of the Earth forces, she surpassed every other recruit on the training ground, even well-trained males, and has shown extraordinary strength, dexterity and stamina on numerous occasions.

Leela is also highly skilled in martial arts which has been shown on numerous occasions. 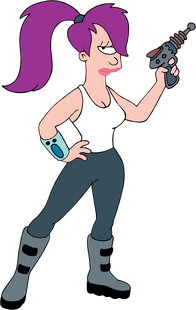 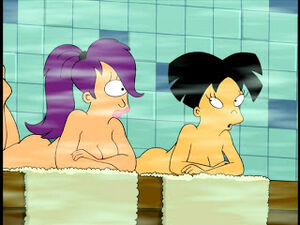 Leela with Amy in the gym's sauna. 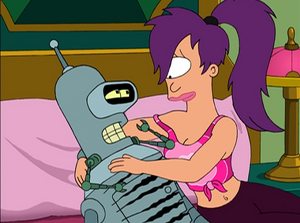 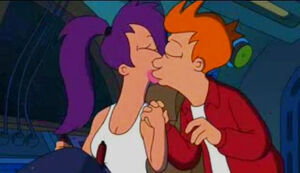 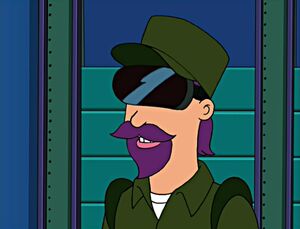 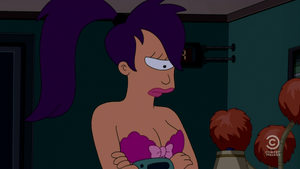 Leela is disappointed that Zapp chooses her mother over her, also her plan has been backfired. 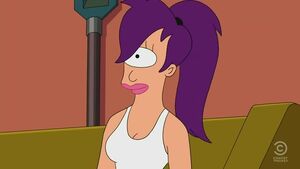 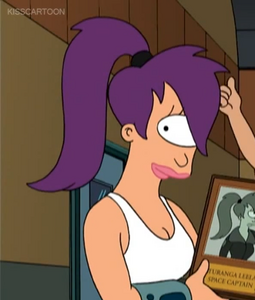