Getting onto Indianapolis 500 (succeeded)

To meet Guy Gagné (succeeded, but ended up being a treacherous bully instead of a hero)

The Shell Crusher (Turbo ending him up scared by Snails)

Turbo, also known as Theo, is the titular protagonist of the 2013 DreamWorks movie of the same name and its spin-off series Turbo FAST. He was Theo as the dreamer of becoming a racer, much to his older, overprotective brother Chet's embarrassment. After the freak accident, he was fused with speed. When he and Chet are taken by Tito, a Taco trucker and dreamer like Turbo, he joined the snail-racing crew.

He was voiced by Ryan Reynolds who also played Deadpool, Guy, and Pikachu in English, and by Yasunori Matsumoto in Japanese.

His eyes are designed more likely like snails and slugs. His eyes bear a similar appearance as the Slugs from DreamWorks' 13th full-length animated feature film, Flushed Away. Turbo is an orange, slender snail with blue eyes and wears a specially designed shell, bearing the resemblance of a race car, with the number "5" on it.

Turbo (Theo) is a snail who dreams of being the fastest, and best racer in the entire world. He has an obsession with speed which causes Chet, his older brother, to be embarrassed. Turbo believes that "no dream is too big, and no dreamer is too small." he seems to have an obsession with speed. Due to his passion with speed, he is somewhat an outsider in the slow and cautious snail community. His dream comes true when he gets in nitrous oxide during a street race, and ends up giving him super-speed. After this happens, he embarks on an extraordinary journey to achieve the impossible; Racing in the Indy 500.

He was a normal snail until he was flung into the top-mounted engine of a nitro-powered street racing car. When the driver of the car activated the car's nitro boost, the chamber Turbo wound up in was flooded with nitrous oxide, which granted him his powers.

Theo's genetic structure mutated from nitrous oxide. He was gifted with super speed and a few traits of an automobile, such as eye lights, a car alarm in his shell, tail lights and receiving radio music.

As a result of his genetic structure mutated from nitrous oxide, Turbo can accelerate to high speeds that surpass most race cars.

In Venice, California, Theo, a.k.a Turbo, is a garden snail who dreams of being the greatest racer in the world, just like his hero, 5-time indinapolis 500 champ, Guy Gagne. His obsession with speed and all things fast has made him an oddity and an outsider in the slow and cautions snail community, and a constant embarrassment to his cautious older brother, Chet. Turbo desperately wishes he could escape the slow-paced life he's living, but his one chance to live proves a near fatal disaster when he tries to recover a prize tomato and needs to be rescued by his brother, Chet.

Demoralized, Theo wanders onto a freeway to admire the traffic and wishes on the very first star. Suddenly, he gets into a freak accident when he gets sucked into the supercharger of a drag racer, fusing his DNA with nitrous oxide on a street race. This incident finds Theo vested with the power of incredible speed and accuracy and some of the characteristics of a car, such as eyes that light up like headlight and a shell that blinks red like taillights and makes car sounds music from a radio.

Unfortunately, Theo's first attempt to show this power off ends with him crashing a Big Wheel tricycle into the garden in disaster that get himself and Chet fired from the garden crew. As the siblings quarrel, Chet is snatched by a crow, but is pursued and rescueed by Theo at a run down strip mall where they are then captured by Tito, a taco truck driver and is brought to race with other snails. Theo astounds both humans and snail alike with his speed and earns the respect of the snails, led by Whiplash, with his crew Smooth Move, Burn, Skidmark and White Shadow, who have impressive skills of their own.

Inspired by this extaordinary snail, Tito dreams to revive the strip mall with Theo as an attracion, and eventually with the help of the snails who manage to divert and strand a tour bus and drum up impressive business. At this success, Theo convinces Tito to try to enter the snail in Indianapolis 500 as a competiter. While Tito's brother Angelo, still declines to support him, the neighbors agree to put up the entrance fee and accompany them to Indianapolis 500 . Once there, Tito is refused entry into the race, but a chance meeting with Guy Gagne gives Turbo a chance to show off his speed which astounds the race track at the snail qualifying for the race, because he set a new record.

This impossible feat soon becomes a sensation on social media, and the owner of the race gives in to the pressure, egged on by Gagne himself, to let the snail compete. However, the night before the race, Turbo is demoralized when his hero, Gagne, sneers at his attempt to race while Chet confesses that he cannot bear to see his brother endanger himself. Regardless the next day, Turbo is in the race, but the dangerous racetrack and far more experienced competition leave him trailing in last place.

Whiplash and his crew give Turbo a vital pep talk at a pitstop, advising him to race like a snail. Back in the race, Turbo realizes what they mean and uses his small size to maximum advantage with maneuvers around and under the competition that no human racer can emulate. With the snail rapidly gaining in the standings, Gagne races dirty and tries to kill the snail while Turbo warns him that his speed power is starting to fade. Finally, in the final stretch with Turbo in the lead, Gagne tries a desperate maneuver to beat the snail and gets into a major crash that snarls all the competitors in a major pileup. Similarly, Turbo is thrown, injured with a damaged shell, and finds to his despair that his speed power is gone.

Alarmed at seeing Turbo giving up and retreating into his shell barely a few feet from the finish line, Chet puts himself into incredible danger to meet up with Whiplash's crew to get to the racer. Seeing his brother and friends arrive riding crows to encourage him to continue, Turbo resumes the race. Unfortunately, Gagne singlemindedly pursues him by dragging his wrecked car after the snail and attempts to crush him. At the last second, Chet tells Turbo to tuck into his shell and roll at Gagne's latest blow, and the force allows him to turble past the finish line to win.

At this victory, the strip mall becomes a major attraction with all the businesses becoming spectacular successes, including extremely elaborate snail races with Whiplash's crew getting special propulsion aids for their shells, while Chet is content as the track referee. As for Turbo, his happiness is enhanced with discovering that his shell has healed, and with that, his superspeed power has returned. 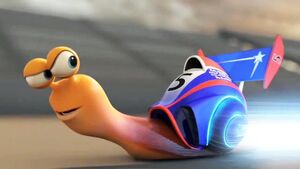 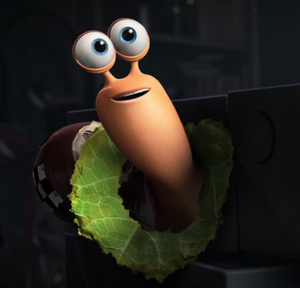 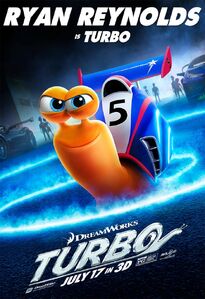 Turbo getting a new racing shell

Putting Turbo onto the race before he got the Superspeed Back

Turbo racing his friends from the Ending