To battle The Pure Ones

Twilight (born as Cassius) is a member of The Band along with Soren, Gylfie and Digger and is one of the main characters in The Guardians of Ga'Hoole book series and it's 2010 film adaption The Legend of the Guardians: The Owls of Ga'Hoole.

He is voiced by Anthony LaPaglia in the film.

He is a Great Grey Owl who along with the Band and the Guardians battle the Pure Ones led by Soren's evil brother Kludd (also known as Metal Beak) and his mate Nyra (though in the film, Kludd and Metal Beak are separate characters with Kludd being a member of the Pure Ones rather than their leader and Nyra's mate).

Later in the books, when Kludd attacks Gylfie, Soren attempts to kill him, but it is Twilight who kills Kludd and saves Soren from having to kill his own brother.

Twilight in Legend of the Guardians: The Owls of Ga'Hoole

Twilight and The Band 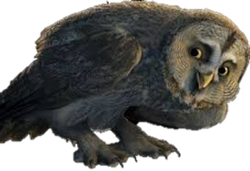