Fighting with her ARMS.

Get the Smash invitation letter (failed), defeat 3 villains, defeat her rival who stands on her way

Fighter
Twintelle also known as "The Silver Screen Queen" is one of the fighters in the game ARMS.

She is a massive celebrity who is attempting to take the ARMS title by winning the ARMS Grand Prix.

Twintelle is a dark skinned woman with with white hair. Her hair has 2 pigtails that act as her ARMS. She wears a black mask, tight pants, a white sleeveless top and a pair of sneaker heels. She is a much more refined fighter than most other ARMS fighters.

Her signature ability is to be able to slow down attacks when she is in the air. Her 3 default arms are the Chilla, Parasol and Thunderbird. 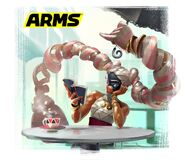 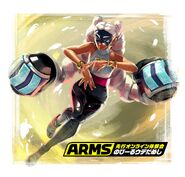 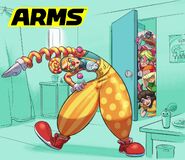 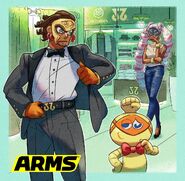 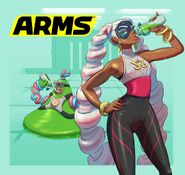 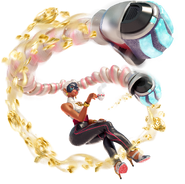 The picture at the end of Twintelle's Grand Prix.

Twintelle along with the ARMS fighters as Min Min's final smash in Super Smash Bros. Ultimate.