Ty Lee is an antagonist turned into supporting character from Avatar: The Last Airbender.

She is voiced by Olivia Hack who also voiced Rhonda Wellington Lloyd in Hey Arnold!.

Ty Lee was Azula's best friend and is still Mai's best friend. She's always in a cheery if not an over-cheery mood. It turns out she has 6 identical sisters. Before she joined Azula's team, she was working in the circus because she was afraid that she would have to deal with being with 6 other sisters that looked exactly like her, and not being able to be her own person. Unlike Mai, she doesn't use any weaponry, she uses her fists and chi-blocking. When Mai double-crossed Azula, Azula almost attacked Mai, but Ty Lee used her chi-blocking on Azula. She ended up getting arrested. Azula told the guards to take Mai and her out of her sight and to let them rot. After the war she was released and joined the Kyoshi Warriors, claiming they had bonded in prison.

Ty Lee was bubbly and outgoing, yet slightly airheaded. She was a direct contrast to Azula's cruelty and Mai's constant torpor. She took delight in her acrobatic abilities, never missing an opportunity to show them off, and often craved attention and recognition, a result of her upbringing as part of an identical set of seven sisters. These attention issues also caused her to be a bit of a flirt, which is also why (according to Mai) she needed the affection of multiple boyfriends.

Ty Lee showed a strong sense of loyalty to her friends, Mai and Azula. Despite her obvious differences from Mai, she had a deep respect for her, and they often made an effective fighting duo, teaming up numerous times in the series. Ever since childhood, Ty Lee also considered Azula as a friend, but as she got older, that loyalty seemed to have been partially out of fear of the princess. When she first refused Azula's request that she join her search for the traitorous Zuko, Azula persuaded Ty Lee by endangering her life during a circus performance. For some time, she never disobeyed Azula's orders. However, her breaking point came at last at the Boiling Rock, during Azula's attempted murder of her own brother and Ty Lee's childhood friend, Zuko. When the rope holding Zuko's gondola was about to be cut, potentially sending Zuko along with several prisoners and friends plummeting to their deaths, Ty Lee showed concern while Azula smirked next to her. After Mai helped Zuko and his friends escape the prison, Azula threatened her life. Seeing Mai in the face of Azula's terrible rage and fearing for Mai's safety, Ty Lee attacked Azula, ending up in jail but finally conquering her own fears and taking a stand against her "friend" after months of obedience.

Ty Lee was known not to hold grudges against her enemies despite their encounters on the battlefield. This was evidenced by her eventual bond with the Kyoshi Warriors, whose confinement she was partially responsible for. She was able to establish a fairly strong friendship with the group while they were imprisoned together. She also showed affection for Sokka, despite having fought him under the orders of Azula.

She was known to be close to animals. In Ba Sing Se, she was seen teaching Bosco acrobatic moves before Toph earthbent her to the ground.

Ty Lee often came off as superficial, which was demonstrated for the first time when she affirmed her beauty to a Kyoshi Warrior and a second time when she warned her friends about the negative energy of their serious conversation, which she said would give them acne. However, whenever a true test of character came up, Ty Lee proved herself to be much deeper than people gave her credit for.

Ty Lee was extraordinarily agile. Even as a child, she was able to execute mid-air somersaults and cartwheels that surpassed even Azula. As she grew up, her agility continued to improve, commonly seen walking around in a headstance on just her fingers. She later developed remarkable acrobatic abilities, which allowed her to join the Fire Nation circus and perform high-wire acts with balance and grace. People traveled for miles to see her perform. Because of this, she was fast and agile in battle, able to outmaneuver almost any opponent she came across and jump exceptionally high and far even from a stationary position. Her abilities allowed her to dodge the attacks of dozens of powerful earthbenders, who were unable to land a hit on her. She was also limber; able to twist, bend, and contort herself into positions nearly impossible for an ordinary person to achieve. These abilities also granted her impressive parkour and free-running skills, allowing her to scale almost any surface or terrain quickly and squeeze through most barriers and small spaces with noticeable ease.

Another of Ty Lee's defining abilities was her mastery of pressure-point-striking martial arts, or chi blocking. With her extensive knowledge of the human body, she could strike sequences of pressure points, immobilizing her enemies to various degrees. She had the ability to paralyze a single body part or an opponent's entire body. This technique allowed her to block certain chi paths in benders to compromise their abilities. This made her especially dangerous to benders who relied solely on their bending and possessed no secondary fighting skills. She was so powerful that outside the walls of Ba Sing Se, she was able to defeat dozens of powerful earthbenders within seconds. However, if her target had faced her before or was expecting her attacks, the effectiveness of her chi blocking decreased as her opponent took measures to prevent her from using the technique. After fighting her before, Suki was able to avoid her attacks at the Boiling Rock, and Katara and Sokka were also able to effectively counter her when facing her again. She took Azula by surprise when she was about to strike Mai because, although the princess was familiar with Ty Lee's fighting style, she had never faced her as an opponent. While Ty Lee was imprisoned with the Kyoshi Warriors she had mentioned that she gave them "a few chi blocking lessons" and in return, she was allowed to join the group. 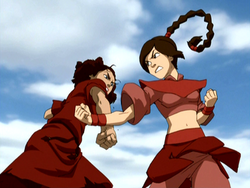 Ty Lee's battle with Suki on the Boiling Rock gondola 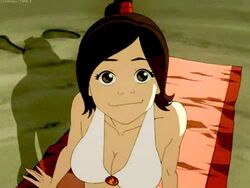 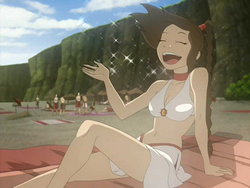 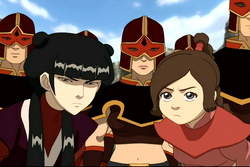 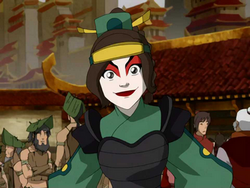 Ty Lee as a Kyoshi Warrior 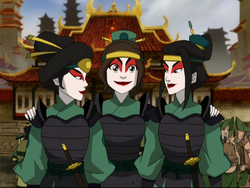