God of War, Law, and Justice

Maintaining his duty as God of War, Law, and Justice

War Deity
Tyr is the Norse and Germanic god of war and justice, who is featured as a side character within the Prose and Poetic Eddas.

Tyr played an important role during the binding of Fenrir, one of the children of Loki and Angrboða. Unlike his brethren, he formed a more amicable bond with the wolf-like beast Jötunn yet at the same time understood the potential calamity the latter could possibly brought to them and entire Nine Realms. In fact, he and his fellow Gods of Asgard saw how their best restraints got destroyed by Fenrir every single time — a testament of Fenrir's concerning growing might.

Following the completion of Gleipnir, Tyr volunteers to carry out the endeavor of restraining Fenrir with it as his cautious brethren watched. In the ensuing uneasy exchange between them, Tyr bargains with the wolf-like beast Jötunn that he offers his hand to him as a pledge should the new enchanted chain doesn't fail under his might before putting it over the latter. To the Gods of Asgard's relief, Gleipnir proved more than strong enough to keep Fenrir restrained, much to the wolf-like beast Jötunn's anger and frustration that he bit Tyr's hand off. As saddened as he was by the loss of his hand, the War God doesn't regret it since he obliged to fulfill his part of the bargain.

During the fateful Ragnarök, Tyr faces off against Garm, Hel's supernatural pet hound who guards the gates Helheim. It is said that Garm would leave his post, a nearby cave known as Gnipahellir, breaking the chains that originally placed to ensure he won't stray too far, and engages a fierce duel against the War God culminating to them killed one another. 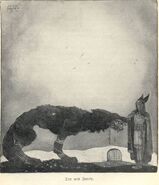