Rescue the other P.F. Squad recruits.

Tyra Elson is one of the two player characters from Metal Slug Advance. She is part of what appeared to be a physical exercise.

She later cameos in Metal Slug Defense, with her appearance being based on her in-game sprites rather than her official art.

Her desire to fight evil made her enlist in the Peregrine Falcons. After receiving the highest grade on the written tests given to the cadets when they enlist, she does not hesitate to participate in the final physical training. She then discovered the rebel attack on the island, and became excited to know she'd finally thwart the forces of evil, like she always wanted. She met Walter after graduating and became good friends with him. Despite being cold-looking and merciless from the outside, she cares about the ones she knows and loves, especially her dog, Angelica. 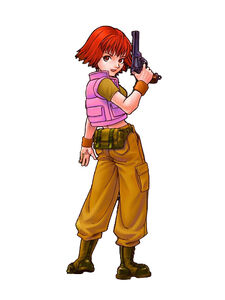 Retrieved from "https://hero.fandom.com/wiki/Tyra_Elson?oldid=1718952"
Community content is available under CC-BY-SA unless otherwise noted.