To take his rightful place of Lord of Casterly Rock (ignoring the fact he murdered his father.)
To get his revenge on Cersei and Jaime.
To help the Golden Company to take the Seven Kingdoms (formerly).
To find Tysha.
To advise Daenerys Targaryen (TV series only).
To defend Meereen from the Slaver Alliance
To support Daenerys and Jon to defend the realm from the White Walkers (TV series only; current, mostly succeeded).

Lord Tyrion Lannister is one of the main protagonists of the A Song of Ice and Fire novels and its HBO television adaption Game of Thrones.

He is the youngest of Lord Tywin's children and member of House Lannister, one of the wealthiest and most powerful families in the Seven Kingdoms. However, in contrast to his family, Tyrion is a truly benevolent, caring and honorable person who would punish anyone who hurts helpless and innocent people, which leads him to turn against his family. Although he is a physical dwarf, he manages to survive using his wit and intelligence.

He is portrayed by Peter Dinklage who played Eddie Plant from Pixels and Eitri in the Marvel Cinematic Universe, and also voiced Mighty Eagle from The Angry Birds Movie.

Shortly after his nephew Joffrey became King of the Seven Kingdoms, Tywin Lannister sent Tyrion in King's Landing to act as Hand of the King in his stead, and protect the city from Stannis and Renly. Although he was successful as a leader, he eventually lost his position when he was injured in battle.

A proud and at times truly hateful misanthrope because of the prejudice of him being a dwarf, Tyrion is cynical and extremely cold towards people however he is loyal and protective to those who treat him with genuine respect and love (which is very few people). One of his stark traits is his indulgence in sex, prostitution and whoring.

He has less than a difficult relationship with his family. His sister, Cersei has been said to have hated him from childhood (even more after hearing Maggy's prophecy) and has an incredibly strained one with his father, Tywin which stems when he was born it caused his mother to die. At the age of 13, Tyrion bribed a Septon to marry a girl named Tysha, but the marriage lasted only two weeks. When Tyrion's father learned about the wedding, he commanded Jaime to say that Tysha was a prostitute whom Jaime had hired to take Tyrion's virginity. Because the “whore” had presumed to marry a Lannister, Tywin had his guards rape Tysha for a silver each and then made Tyrion go last for a gold coin, stating that a Lannister was worth more.

After many years Tywin sentenced his son to death out of a crime he didn't do (regicide; poisoning his nephew, Joffrey) and after hearing Jaime's confession about Tysha, Tyrion got enraged and shot Tywin with a crossbow. He has shown to hate his nephew, King Joffrey which is quite mutual which seems to get worse from him be beheading Ned Stark, recklessly starting a war between the houses Lannister and Stark. Tyrion was the only person to directly insult and even attack his bastard nephew. Once he slapped Joffrey across the face while calling him a "vicious idiot for a king" after he ordered the deaths of an entire crowd of commoners when they threw a cow pie at him. Because of Tyrion's constant death threats, Joffrey believed that it was Tyrion who poisoned him at his wedding and accused him of his final breath. The only good relationship he's had with any of his siblings was Jaime, but this came to an end when Tyrion learned from him the truth about Tysha. In the TV series, the true story of Tysha has been removed.

Afterwards, he was married to Sansa Stark so that his father could claim the North.

Tyrion recognized from an early age that his mind was his greatest weapon, due to being born a member of House Lannister with the expectation of upholding his family's noble name, yet lacking the physical attributes possessed by his older siblings. Thus, he has committed himself to possessing a sharp intellect in order to help make up for his dwarfism, and he is frequently able to use his superior intellect to get the better of those who initially look down upon him or weasel his way out of tight situations, though he is not above resorting to using his family name and enormous fortune to bolster his position.

He has also shown himself to possess a keen mind for strategy, as is evidenced in his research into defending against sieges and successfully conducting the defense of King's Landing during the Battle of the Blackwater. Tyrion prides himself on his ability to read people as easily as he does books, and he has on many occasions easily gotten the better of not just Joffrey and Cersei but also experienced players such as Littlefinger and Pycelle.

Despite his harsh treatment at the hands of others over the years, Tyrion has managed to develop a thick skin, able to brush off others' japes about his short stature (except when coming from his father). Tyrion advised Jon Snow how to handle his own bastard status, which reflects Tyrion's own approach to life: take your impediment in stride and wear it like armor, so it cannot be used to hurt you. Being born a dwarf and subject to ridicule for most of his life, Tyrion has admittedly developed a soft spot for his fellow outcasts and has shown them kindness, such as having a saddle designed for the crippled Bran Stark allowing him to ride. Being physically weak, Tyrion is also upset when the helpless are harmed.

He was particularly insulted when Janos Slynt carried out an order to kill a defenseless baby girl, Barra (because she was one of Robert's bastards), and as punishment had him exiled to the Wall. Tyrion is also genuinely loyal to those who treat him with love and respect. He also seemed to have a level of honor and dignity that his family seemed to lack; events such as the Red Wedding disgusted him, and he considered them to be crimes (though he did admit that there was a certain level of "cheating" in a war that he is comfortable with, the Red Wedding went beyond that).

Tyrion, however, is not without faults. He tends to overindulge in food, drink, and sex in part to self-medicate for the terrible treatment he's suffered most of his life. Tyrion can also act viciously if he feels he's been wronged - such as confining Grand Maester Pycelle to the Black Cells for betraying him or, in his darkest hour, killing Shae for testifying against him during his trial and having an affair with his father, and then going on to kill Tywin himself. Because his father and sister treated him like a social leper, Tyrion craves love and acceptance and is genuinely hurt when this is denied him by others.

He has complex relationships with other members of his family, most of whom resent him and only thinly veil their contempt for his existence. His older sister Cersei blames him for causing the death of their mother and has (as revealed during a conversation with Oberyn) hated Tyrion since his birth. His father, Tywin, shares Cersei's resentment for Tyrion due to the death of his wife while birthing him, as Joanna Lannister was the only person Tywin ever loved. Although Tywin recognizes and respects Tyrion's intellect, it does not lessen his prejudice towards his youngest son; by the same token Tyrion fears and admires his father, but hates him for his inflexibility and unwillingness to show any love for his children. Tywin also just thinks it is an embarrassment that Tyrion was born with a physical disability, seeing it as a judgement from the gods meant to humiliate him by his son's mere existence.

Also, his lifelong torment for being a dwarf has turned him into an outwardly cold and callous person, particularly towards people he dislikes. He possesses an intelligent, cynical and sarcastic sense of humor.

Before becoming an exiled criminal and traitor, he used to show admiration and/or affection for his sister Cersei and his father Tywin, but Jaime was the only sibling he maintained a good relationship with. The rest of House Lannister seemed to have accepted Tyrion in the family, for example his uncles, Kevan, Genna, Gerion, and Tygett always got along with Tyrion and treated him as equal. Apart from Joffrey, his other two royal nephews, Myrcella and Tommen, liked him.

However Tyrion has a very dark side, threatening Cersei after she humiliates him, and coldly murdering Tywin after he tries to have Tyrion executed for a crime he didn't commit. Tyrion was also pleased to see the dead hanging body of Masha Heddle, the innkeeper of the crossroads inn, who let Catelyn Tully and her men take Tyrion without help, even though there was little Masha could do against so many armed men. He also had some houses of King's Landing burned to the ground, as he needed the area to prepare a strategical plan against Stannis Baratheon. He knows Joffrey is illegitimate and Stannis Robert's rightful heir but helps his family, despite the tyranny they perform against the smallfolk.

During the third book, he commanded his sellsword Bronn to murder a singer, because Tyrion had suspicions about him liking Shae and they were trying to blackmail him. He becomes angrier after he learned the truth about his first wife, Tysha, and now fantasizes about many horrible ways to get his revenge on his siblings, such as rape and kill his sister. He also hits Jaime in the face after he told him the truth about Tysha after freeing him; a furious Tyrion tells Jaime he actually really poisoned Joffrey and reveals Cersei's infidelity and her sexual relationship with Lancel and the Kettleblacks, adding the fool Moon Boy as an exaggeration to make Cersei look more like a whore. 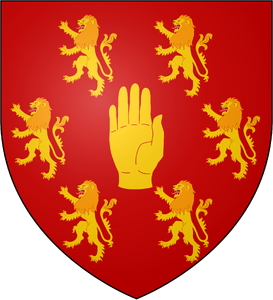 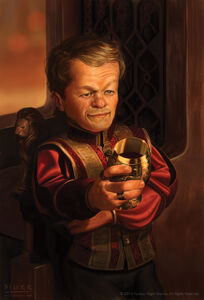 Tyrion at the Wall. 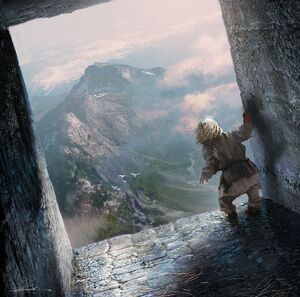 Tyrion looks at the Mountains of the Moon from his sky cell. 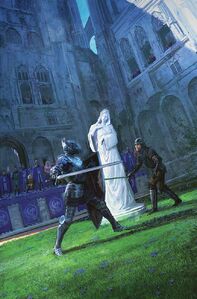 Tyrion watches his trial by combat, fought by Ser Vardis and Bronn in the gardens of the Eyrie. 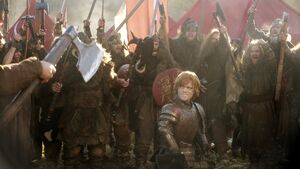 Tyrion leading the Vale Mountain Clansmen in the Battle of the Green Fork. 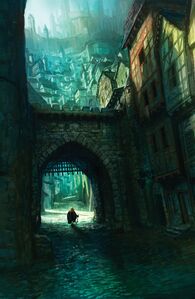 Tyrion in the streets of King's Landing. 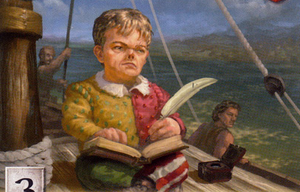 Tyrion as Hugor Hill with Griff's group, traveling in the lands of the Rhoyne. 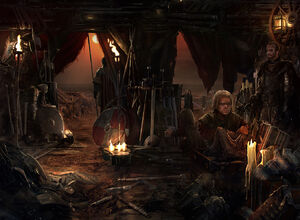 Tyrion with the Second Sons, outside Meereen. 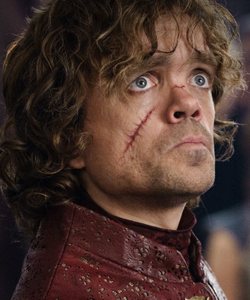 Tyrion after the Battle of Blackwater. 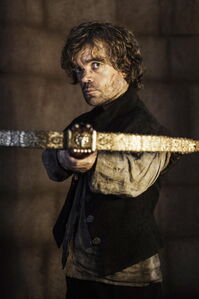 Tyrion before killing his father.