He was later redesigned as a new incarnation of Captain America after Rogers retired himself from the mantle and, just a few years later, as U.S. Agent when Rogers returned. Walker originally served as an antagonist towards Captain America, with him being considered a dark shadow of Rogers' patriotic and pacifist qualities. He would redeem himself and become the "U.S. Agent", protecting America's interest while becoming a member of numerous teams.

He was created by Mark Gruenwald and Paul Neary and first appeared in Captain America #323 (November 1986) as Super-Patriot.

In the Marvel Cinematic Universe, the character is portrayed by Wyatt Russell in the Disney+ tv series, The Falcon and the Winter Soldier.

John Walker was an ultra-patriotic U.S. Soldier with a propensity toward violence. He had been called in to serve the United States's interests in several unpopular wars. Originally he went by the code-name "Super-Patriot" and was The United States Government's answer to several sketchy operations against communists, terrorists and suspected traitors to American ideals.

Walker quickly came into conflict with Steve Rogers AKA Captain America and became something of a dark shadow to him, showing readers what happens when patriotism goes too far and becomes blind obedience to those deemed keepers of America's best interests. Steve Rogers would eventually go through an existential crisis when he realized how many civil-rights American Politicians were subverting in the name of his country both abroad and at home and gave up the Captain America mantle. The US government transferred the title of "Captain America" to Walker who was glad to serve his country as ever and was truly honored to be the new face of American patriotism.

Captain American would take up a new outfit and code-name as "The Captain" a mostly black outfit as opposed to the previous blue-one. During his time out of the lime-light as The Captain, Rogers uncovers a scheme by The Red Skull to undermined US with Nazi values disguised as right-wing propaganda with deep-cover HYDRA agents working in the US.

Walker upon seeing he was a product of HYDRA propaganda helps Captain American to take down the conspiracy, though the values instilled in him were shown to be part of The Red Skull's values, they had been directed at the very concept of America itself and so Walker was willing to take down his own sponsors. Rogers would reclaim the title and costume of Captain America with Walker getting Roger's previous The Captain outfit and taking up the new title "U.S.Agent"

Though U.S. still represents a jingoist level of patriotism he has been disillusioned to system and now works solely on the ideal of patriotism and not blind loyalty to those who claim to represent America. He is known for his brutal tactics and an America-love-it-or-leave-it attitude. He still freelances as a black-opts agent for US interests though based on his past experiences, inadvertently serving HYDRA interests, he reserves the right to refuse any order if he suspects his handlers and is even willing to turn on them. Because of both his skill and loyalty U.S. Agent is still used for important secret missions for American interests, but his violent and willingness to attack his own contacts has seen to it that Walker is only called in for clear-cut black and white issues so as not to trigger him.

Jonathan F. "John" Walker was born in Custer's Grove, Georgia to Caleb and Emily Walker, and was the brother to Michael and Kate Walker. John admired his brother since he was serving as a helicopter pilot, but didn't know that Michael was suffering from post-traumatic stress disorder and alcoholism. Michael would commit suicide after nearly killing his family when almost burned down their home, but Caleb and Emily told John and Kate that he died during the war.

Wanting to honor Michael's memory, John joined the United States Army and served at Fort Bragg, but admitted that he didn't feel like a hero like his brother. Going through the Power Broker process to compete the wrestling federation, he was stopped by an agent who told Walker that he could become a superhero.

Walker became "Super Patriot", and argued that he stood for America's ideals and would outspokenly criticized his country's greatest hero, Captain America. Walker was assisted by the Three Bold Urban Commandos, who would stage attacks and intimidate others so John could look heroic. When a terrorist named Warhead planned on bombing Washington, D.C. with a nuclear weapon, Walker killed him after battling Captain America in Central Park.

When Rogers abandoned his title as Captain America amidst being tricked by Red Skull, Walker succeeded him and had Lemar Hoskins (Battlestar) be his partner. When his allies Left-Winger and Right-Winger revealed his identity to the public, the terrorist group Watchdogs murdered his parents. Angered, Walker murdered most of the Watchdogs and had Left-Winger and Right-Winger be left with explosives on them. The two survived the explosion, but later committed suicide after being horrifically burnt, leaving Walker remorseful. After stopping Red Skull with Rogers, Walker was deemed unworthy to wield the title of Captain America and had to leave it.

After returning the mantle to Rogers, Walker's death was faked by the Commission, and he returned as the "U.S. Agent", wearing a dark uniform that Rogers wore when he was "The Captain". He was then placed as a watchdog for the West Coast Avengers to help the team get government clearance, and would rescue and reconcile with Battlestar. After the West Coast were dissolved, Walker reluctantly joined Force Works when he was persuaded by Scarlet Witch. Wanting to change his image to be a better person, Walker decided to make the team a tight military that expressed dedication and strength.

For years Captain American was used as the face of America until he became a caricature in popular media of ultra-patriotic conservative values, despite numerous issues to make him a fully three dimensional character. With many real-life media pundits trying to make Captain America represent their outlook on what American should behave like, Mark Gruenwald decided to created John Walker as a warning of the sort of crazed fanatic Captain America would be if those values were fully embraced. Readers hated the new ultra-patriotic Captain America and the story is used as a cultural tipping point for why Steve Rogers should be loyalty to traditional American ideals while not blindly loyal to the government itself, unlike Walker. 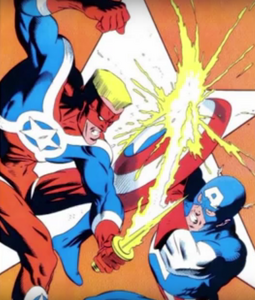 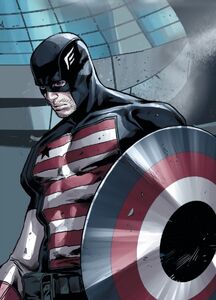 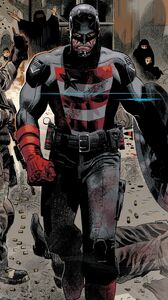 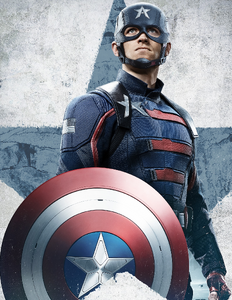 Wyatt Russell as U.S. Agent in The Falcon and the Winter Soldier. 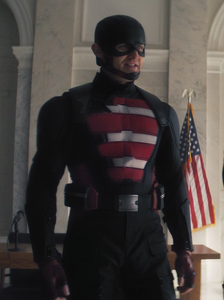 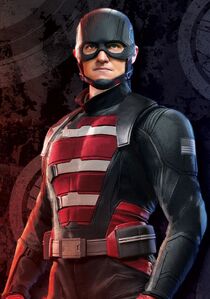 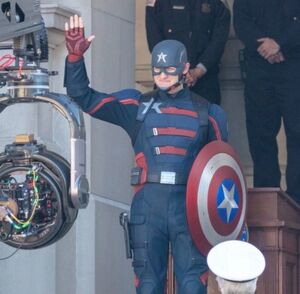 Behind the scenes shot of U.S. Agent in The Falcon and the Winter Soldier. 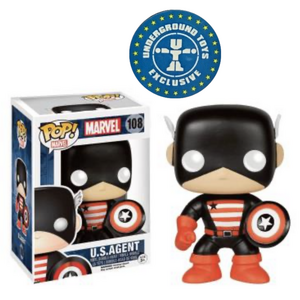