Watch over the multiverse without interfering with its events (ongoing; temporarily failed).

Defeat Infinity Ultron and save the multiverse
Contain the Infinity Stones (both succeeded).

Uatu, also known as The Watcher, is the main protagonist of the 2021 Marvel animated anthology series What If...?.

He is the overarching protagonist of the first seven episodes and later ninth episode of Season 1, as well as one of the protagonists of the eight episode "What If... Ultron Won?". He is an omniscient being and the most prominent member of the Watchers who observes the Marvel multiverse and the alternate branched timelines that protrude from it, but is unable to directly interfere with them. However, he breaks his oath once one universe bears an Ultron that obtained the Infinity Stones and sensed the Watcher's presence, tasking a group of alternates to stop the artificial intelligence.

He is voiced by Jeffery Wright, who also played Felix Leiter in Casino Royale and James Gordon in the The Batman, and also voiced Poppa Henry in The Good Dinosaur and McWinkle in Green Eggs and Ham.

Not much is known about Uatu's past, but he is one of the Watchers who watches over the multiverse, where he watches different realities that are separated from the sacred timeline. As a Watcher, Uatu took an oath to never interfere with any reality he observes, as it's believed that doing would cause more harm for the universe. Following the fracture of the multiverse when He Who Remains was killed by Sylvie, the Watcher would observe all universes from the Nexus of All Realities.

What If... Captain Carter Were the First Avenger?

Visiting a different universe, the Watcher observed a universe where Peggy Carter became a super soldier instead of Steve Rogers, who would don an armored suit as HYDRA Stomper. Uatu would witness Peggy lead the Howling Commandos against the Red Skull, who managed to bring a creature that was stopped by Carter, who was then transported to the twenty-first century.

What If... T'Challa Became a Star-Lord?

After seeing Captain Carter's reality, the Watcher turned to another universe where Prince T'Challa was kidnapped by the Ravagers, and become a legendary thief known as Star-Lord. Uatu observed T'Challa working with Nebula and the Ravagers to steal the Embers of Genesis from the Collector, whom had become the galaxy's kingpin after Star-Lord managed to change Thanos. After seeing T'Challa return to Wakanda with his friends, the Watcher noted that the reunion could be cut short due to Ego coming to Earth and finding his son Peter Quill.

What If... the World Lost Its Mightiest Heroes?

Traveling to a third reality, the Watcher observed a universe where the Avengers' candidates were assassinated by Hank Pym, who wanted to avenge his daughter's death as he blamed Nick Fury for inspiring her to become an agent of S.H.I.E.L.D. Pym would at first incriminate both Black Widow and Hawkeye by having them appear as Tony Stark's and Thor's killers, and later killed the two to complete his mission. Due to his actions, Loki would arrive to Earth to take over the planet, as Pym was later arrested by Fury with Loki's assistance. Despite Loki trying to take control, the Watcher noted that there was always hope, as Fury recruited Captain Marvel and Captain America to the Avengers' initiative.

What If... Doctor Strange Lost His Heart Instead of His Hands?

Going to a different reality, the Watcher would witness a what if scenario of Stephen Strange losing his heart instead of his hands, as Christine Palmer died in a car accident while going on a date. Uatu would then see Strange join the Masters of the Mystic Arts and defeat Dormmamu, but also see him use the Eye of Agamotto to travel back in time and prevent Christine's death. Once Strange learned from the Ancient One that Christine's death was an absolute point, he decided to go back to the distant past and absorb other beings to become powerful enough break the point. The Watcher would narrate these events, which also caused Strange to sense Uatu's presence, but the latter wouldn't respond. Uatu later witnessed the destruction of Strange Supreme's reality, and refused the latter's request to interfere.

Going to an alternate universe, the Watcher narrated of how in this reality, a zombie outbreak started when Hank Pym rescued his wife from the quantum realm. Due to Janet being afflicted with the quantum virus, she infected Hank and the two started to spread the virus across the world. He then saw the last emanates of the superheroes traveling to Camp Leigh to find a cure, but learned that Vision was tricking anyone to come there to feed a zombified Scarlet Witch. The android would see his wrongdoings, revealing that he managed to create a cure for Scott Lang, and allowed the others to escape as Wanda attacked them. Towards the end, the Watcher laments that humans are heroes hold onto hope, but knew that Wakanda was ransacked by zombies and the arrival of a zombified Thanos.

What If... Killmonger Rescued Tony Stark?

In the next universe, The Watcher told the tale of how Tony Stark never became a superhero, instead of being saved by Erik Killmonger. Despite Erik's appearance of being a heroic figure, it was a lie as he used his "allies" to gain the trust of the Wakandans and start a war between the country and the United States. Despite seeing a grim universe, the Watcher lamented that heroes were never gone, as Shuri and Pepper Potts joined forces to expose Killmonger.

What If... Thor Were an Only Child?

In alternate Thor's universe, the Watcher lamented how Odin adopting Loki would humble the god of thunder, but in this reality, Odin returned Loki to Laufey. Uatu observed this version of Thor landing to Earth and throwing a worldwide party in Las Vegas, where he befriended Jane Foster and briefly battled Captain Marvel. The Watcher then watched as Thor prepared to return home, but saw Ultron and his sentries arrive to Party Thor's universe.

As Uatu watches the events of Ultron winning in Avengers: Age of Ultron, Ultron is bent on destroying everything and as he does that, he is able to see Uatu watching everything happen and realizes there are more universes and is bent on destroying those universes so Ultron fights Uatu, wins and escapes to the other universes. Uatu's only hope is to free Strange Supreme from "What If... Doctor Strange Lost His Heart Instead of His Hands?" to stop Infinity Ultron. Reaching to Strange Supreme, the sorcerer asks Uatu if he is ready to break his oath to save the multiverse.

What If... The Watcher Broke His Oath?

Though he initially wanted to battle Ultron with Strange Supreme, he decided to bring a group of others to be able to stand against the artificial intelligence. Uatu chose Captain Carter, T'Challa, Prince Killmonger, Party Thor, and Gamora and tasked them with stopping Infinity Ultron and giving them the title of Guardians of the Multiverse. After forming the group, Uatu proceeded to watch them defeating Infinity Ultron by having Zola transfer his conscious into his body. Once Strange Supreme created a pocket dimension to trap Killmonger and Zola, the Watcher asked Strange to watch over the dimension to prevent the two from ever escaping and using the Infinity Stones. He then returned the others to their universe, but decided to send Black Widow from Ultron's universe to a universe where Romanoff was killed by Hank Pym.

Uatu shows little to no emotion as he speaks. He is especially dedicated to his job, stating that he will not intervene in the events of the Marvel multiverse. After his encounter with Ultron he is terrified because of what Ultron might do with the Multiverse, he becomes so desperate that he is ready to break his oath and ask Strange Supreme for help. He decides to break oath for the sake of the multiverse, and later states that he will protect it since every story is his home. 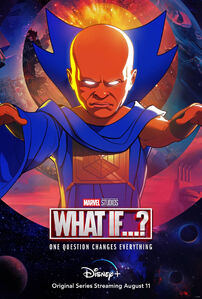