Magic Otaku
Strongest Magician in the World
The Almighty God

Magi: The Labyrinth of Magic

Guardian of the Sacred Palace

Watching over the countless worlds in the Sacred Palace.

Create a new world and carry on Solomon's will. (succeeded)

Uraltugo Noi Nueph, or simply known as Ugo, is a major supporting protagonist in the manga/anime series, Magi: The Labyrinth of Magic. He is the first thought-to-be Djinn of Aladdin and has been a friend of his for a very long time.

In truth, he is a former Magi from the world known as Alma Torran, where he served his closet companion and king, Solomon Jehoahaz Abraham, along with his queen, Sheba. He was also one of the wielders of the 72 Divine Staves. Upon the destruction of his world and the deaths of his king and queen, his final task was to create a new world and raise Aladdin.

This led to the creation of the Magi system where Ugo assigned the Djinns to guard the Metal Vessels in underground cities known as Dungeons. Ugo himself then became a Djinn himself and the Guardian of Sacred Palace, where he would watch over the countless worlds around him.

He was voiced by Toshiyuki Morikawa in the Japanese version, and by Patrick Seitz in the English version.

In his Flute Form, Ugo is a small, golden and metal flute. He is usually on a string around Aladdin's neck.

In his Djinn Form, Ugo has a huge body, but he has no head, and is nearly naked except for a fundoshi-like piece covering his genitals. Sometimes, Aladdin rides where his head is supposed to be, causing people to think he is disproportionate. His missing head is due to Aladdin not being able to summon enough strength to bring him out.

When he was a human, Ugo had light blue hair and red eyes. He also wore glasses, which showcased that he was quite a science geek.

Ugo respects Aladdin a lot, calling him Emperor and will do anything to protect him. In his battle against Judal, when Aladdin was injured, Ugo became angry and went on a rampage and completely crushed Judal. He is also very shy of women and would faint if a woman touches him.

Ugo was with Aladdin in the "Room of Fortitude". For a long time they were unable to escape. Ugo taught Aladdin everything he knows. Aladdin used one of his wishes to make Ugo his friend. They had good times together until it was time for Aladdin to leave. Ugo went with him, but his head wasn't so lucky.

When Aladdin first end up meeting a thieves guild, they try to rob him. Aladdin blows in his flute and summons Ugo, thus destroying the guild. He later summons Ugo when he goes to with Leila to help save Sahsa and her caravan from thieves. Ugo easily defeats many thieves, but Leila thanks him and by mistake touches him, causing him to faint and he goes back. Aladdin blows his flute and throws it in mid air, summoning Ugo and demolishing the guild. He is next seen surprising Alibaba Saluja.

In this arc Ugo is first seen while the Kouga Clan were celebrating. Aladdin wanted the people who saved him to meet Ugo. Ugo released his hands from the flute scaring every throughly. This caused everyone to question who Aladdin is revealing that Aladdin is a Magi. Ugo is next seen when the women of the kouga clan are kidnapped, he along with Aladdin and Baba rushed over to them on his back, only to find out that they had already been saved by Dorji and the rest of the kouga clans men. Once they finished and the women were safe Ugo went back into the flute. He wasn't seen again until Aladdin sensed that Hakuei Ren and Seishun Ri were in trouble. Ugo knocked away Ryosai and his men and saved them. Afterwards Hakuei's metal vessel began to glow and Aladdin touched it summoning Paimon. Ugo then has a unheard conversation with Paimon. This includes her teasing him but ends with Paimon refusing his offer saying that she will only help hakuei become king. Ugo was called back to his flute and was not seen for awhile.

Ugo is first seen saving Aladdin and Morgiana from slave traders thus allowing for their escape. Because of this he was recognized by Leila and Sahsa.

Ugo is summoned by Aladdin surprised Sinbad and Jafar. CHe is fully summoned while Aladdin teaches Sinbad that he is a Magi. Ugo is next seen when Aladdin summons him to stop the fog troupe from further attacking and stealing Balbadd's food and money. He is only out for a short while until Aladdin calls him back because of Alibaba's interference. He is not seen again until he is summoned by Aladdin to save him from Judal's lightning magic. He quickly begins his attack on the other magi and though it appears he had a hard time at first; he ultimately defeats Judal. As Ugo is about to deal the final blow, Judal he is saved by Kougyoku Ren and Ka Koubun. While Judal is being healed by Ka Koubun, Ugo squares off against Kougyoku. Despite his best efforts he is quickly defeated by Kougyoku's Djinn weapon equip. She blew a hole through his chest causing Aladdin great anger and desperation to save him. Trying to save Ugo by giving him Magoi almost kills Aladdin from exhaustion. Ugo's head is next seen in Aladdin's dream telling him about what a Magi is and supposed to do. He sends Aladdin to receive Solomon's Wisdom in order to perform a miracle. He tells Aladdin that he won't be seeing him again. He begins thinking to himself that Aladdin doesn't need him anymore because Aladdin has found friends and Companions to fight for him.

Aladdin can summon Ugo but later on Ugo tells him that he is not Aladdin's Djinn.

To summon Ugo, Aladdin must blow into his flute, thus giving him Magoi. 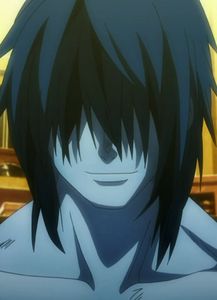 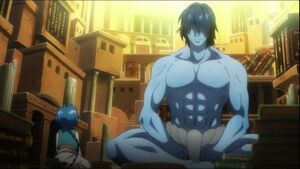 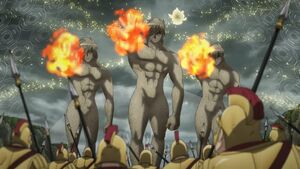 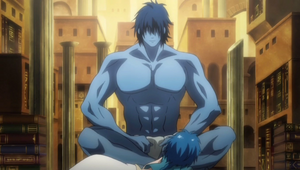 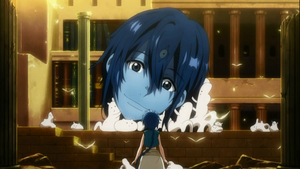 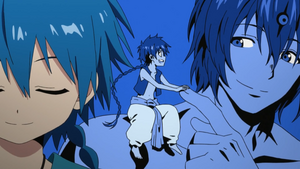