Ultraman Blu is the main deutragonist of Ultraman R/B. He is the (adoptive) younger brother and partner of the protagonist of the series, Ultraman Rosso, also known as Katsumi Minato, and the tritagonist Ultrawoman Grigio, also known as Asahi Minato. Blu had a human host called Isami Minato.

1300 years ago a meteor struck the Earth leaving a massive crater releasing Grigio Bone (left) and the R/B Brothers (right). Tried to stop him but failed a result of them dispersing into R/B Crystals.

Ayaka City was home to two teenagers Katsumi and Isami Minato. Katsumi played baseball while Isami was a scientist.

One day Katsumi and Isami was investigating the area then the Kaiju Grigio Bone appeared once again. Isami distracted the monster while Katsumi was rescuing a boy. Isami was at the bottom of the Kaiju ready to squash Isami when Katsumi tried to save him.Then two R/B Gyros and R/B Crystals in front of them and used the R/B Gyros to transform into Ultraman Rosso and Ultraman Blu. Confused by their gigantic size the Kaiju charged at Blu until Rosso fired a Fire bullet at him,after that Blu unleashed a jumping kick but missed after Rosso tried to hit him with a tree but wasn’t affected.They noticed that they were running out of time then changed Crystals  they kept fighting until they changed Crystals again and they used Flame Sphere Shoot and Aqua Stream to finish him off. 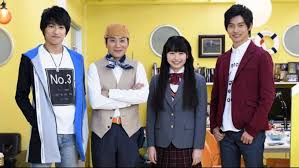 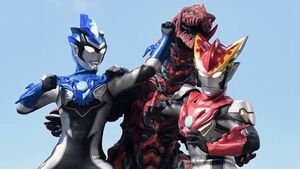 R/B Brothers Vs Grigio Bone
Add a photo to this gallery
Retrieved from "https://hero.fandom.com/wiki/Ultraman_Blu?oldid=1644293"
Community content is available under CC-BY-SA unless otherwise noted.