Ruler and main protector of the Land of Light

Protect the Land of Light.

Cosmic Entity
Ultraman King (ウルトラマンキング Urutoraman Kingu) is the most powerful Ultra in the Showa Universe and is from the Land of Light. He is the oldest Ultra, ancient even before every other known Ultra. He was born in the Land of Light, and is the second oldest Ultraman on the entire multiverse. In the 2009 film Mega Monster Battle: Ultra Galaxy Legend The Movie, he is considered to be, and respected as, the "God" or Elder of all Ultra heroes. Despite the name, he is not the king of the Land of Light. He is supposedly all powerful and undefeatable, but lives on his own on the Planet King. From his own planet called King, he observes the evolution of the Ultra Brothers. He has a beard and crown. Possessing almighty power, Ultraman King is the most powerful of all the Ultraman race. He is said to have similar origins as Ultraman Noa. Despite being called Ultraman King, he confirmed to Ultraman Hikari he has many names, and that Ultraman King is not his real name, but he merely adopted it for his love to the human race.

A legendary Ultraman from the Land of Light, King existed even before the Plasma Spark and was part of its construction team and is one of the Ultra Elders. He is seen as a god-like figure to the people of Nebula M78, Planet Leo in L-77 and Planet U40.

After Ultraman Taro's time on Earth, King began to watch one of the last survivors of Nebula L77, Ultraman Leo, as he defeated monsters with little beyond his fighting skills. During Leo's fight with Alien Pressure, King came to Earth himself and assisted Leo, defeating Pressure and giving Leo his Mant as a weapon that would help him out in later battles. King returned to Earth months later to reveal Alien Babalou, who was disguised himself as Leo's brother Astra to steal the Ultra Key, which was later safely returned, and revived Leo after being killed by Alien Bunyo. King, while not directly interfering with the Ultra Brothers since, still contributed much to the forces of good. Before Leo encountered him, no Ultraman had ever seen him in the flesh. He is extremely powerful in the appearances he has made, showing he is able to bring Ultraman Leo back to life after he'd been sawed to pieces by Commander Black without any effort. His age was reviewed to be 300,000 years in the 2003 movie New Century Ultraman Legend 2003: King's Jubilee (新世紀2003ウルトラマン伝説 THE KING'S JUBILEE Shinseiki Urutoraman Densetsu: THE KING'S JUBILEE), but the chronological order of this work is unclear.

Ultraman King appeared in this special to motivate the former crew of GUYS: Guards for GUYS, Ryu Aihara not to give up hope when they are battling Armored Darkness.

In Mega Monster Battle: Ultra Galaxy Legend The Movie its revealed that he single-handedly defeated Ultraman Belial and formed the Land of Light's moon around him to imprison him in a matters of second . He is later seen watching over Ultraman Zero’s training with Ultraman Leo. It was also Ultraman King who explained to Zero the truth of his "exile" and that his father is Ultraseven. When Seven’s eye slugger was sent as an S.O.S., Ultraman King sent Zero and the Leo Brothers to the battle. Later, after Belial is defeated by Zero, he gives a speech to all of the assembled Ultras in the Land of Light. 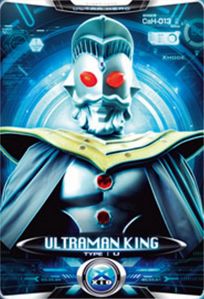