Protective Leader
Ultraman Zero (ウルトラマンゼロ Urutoraman Zero) is a major protagonist in the Ultraman franchise, starting off as the overarching protagonist in Ultra Galaxy Legends and the main protagonist in some of his movies and side stories, including Ultraman Saga, and the narrator of Ultraman Retsuden. He is the son of Ultraseven and was a pupil trained under Ultraman Leo after he was banished from the Land of Light by his father for attempting to take the Plasma Spark for himself. His training ultimately led to his redemption in his very first battle with Belial and his army. He is considered one of the strongest Ultras in history.

He is voiced by Mamoru Miyano, who is famous for his villainous role Light Yagami from Death Note, and later voices Setsuna F. Seiei in Mobile Suit Gundam 00, Cilan in Pokémon, Shirou Fubuki in Inazuma Eleven and Haruo Sakaki in the anime Godzilla trilogy.

Ultraman Zero is the youngest of the Ultra Seven. While he is training under Ultraman Leo, the Land of Light is attacked, and it joins the Ultra warriors to defeat the formidable enemy Ultraman Belial. Zero becomes dedicated in protecting his homeland, pursuing after many types of powerful villains and joining forces with Glenfire, Jean-Bot and Mirror Knight in an alternate universe and faces Kaiser Belial. Likewise, he intends to atone for his misdeed in the Land of Light as well as redeem himself in his father's eyes. 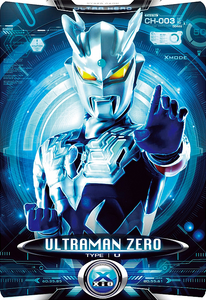 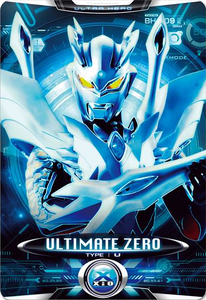 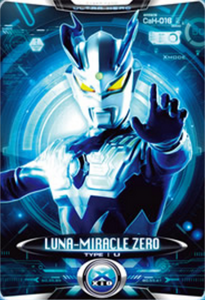 Luna-Miracle Zero
Add a photo to this gallery
Retrieved from "https://hero.fandom.com/wiki/Ultraman_Zero?oldid=2150493"
Community content is available under CC-BY-SA unless otherwise noted.