To save Princess Emeraude.

Knight
Umi Ryuuzaki is the Magic Knight of Water and the character from Magic Knight Rayearth. Despite being a beautiful and elegant girl, with a tall model-like figure and long, flowing blue hair, she actually has a short temper, and was initially shown to be the most skeptical of the three. Later on, however, between the three Magic Knights, she took on the mantle of the Big Sister and proved to be very protective of her two best friends, Fuu Hououji and Hikaru Shidou.

Umi Ryuuzaki is voiced by Konami Yoshida in Japanese and Wendee Lee in English version, who later voiced Shura Kirigakure of Blue Exorcist, the titular Haruhi Suzumiya and Yoko Nakaizumi of Lagrange: The Flower of Rin-ne.

Umi is a tall, beautiful girl with flowing silver blue hair and blue eyes. Umi's school uniform has a blue jacket, white blouse, orange necktie, and a light blue skirt and white petticoat. and blue headband. When she arrives in Cephiro, she recieves white and gold armor lined with sapphires. When Umi's armor evolves for the last time, she wears a black leotard with blue armor at the top with a blue cape. Despite her lovely model-like appearences, Umi is actually short-tempered and sometimes arrogant and doubtful.

Not afraid to speak her mind, Umi sometimes comes across as a selfish person. However, she cares deeply about her friends. She panics quickly, but under her impulsive behaviors lies an optimistic and caring young lady. This helped to raise her hidden power level beyond her own expectations many times. She uses rapiers well because she fences. Her first weapon is a rapier, a very thin sword. Then she receives a rapier of Escudo that melts into water whenever anyone else touches it. Her magical element is Water.

Umi Ryuuzaki came from a very wealthy family with parents who both doted on her, as she is an only child. As a result of this upbringing, she grew up as a slight spoiled brat with a hidden short temper. She is someone who could freely speak her mind that sometimes comes across a selfish person. Her short temper is hidden under a calm exterior which could be destroyed by two things that she cannot stand the most; the unnatural occurrences in Cephiro and Mokona's slightly frustrating yet adorable behavior.

But, that was only on the surface. She is actually a very protective and sensitive person who worried endlessly about the well being of the ones closest to her, namely Hikaru and Fuu. Her protectiveness of her two friends is over the top, she would be willing to risk her life to save theirs if the situation needs it. She is the type of person who would tease someone they like endlessly, but when they are in trouble, she would be the first one lending a hand. She is slightly impulsive and often would talk without thinking. Umi is also a slightly tsundere type who deny all the good things she'd done when pointed by other people. Though she matures throughout the season, she is still completely clueless about love.

When in battle, she is calm, cold and controlled, much like the flow of her respective element. A prideful warrior, she won't back down from a fight, even though the fight was to her disadvantage as shown when she fought against Tatra and Tarta of Chizeta. Her loyalty to her comrades are unquestionable and her fierce determination to protect those she loves is what made her a tough opponent to beat.

As fierce and calm she may be, Umi has one weakness. The one thing she hated the most is to be left alone.

Because of her Fencing background, the weapon that she uses is a fencing-like sword. Her technique is thrust and parry, which usually gives the enemy a One Hit K.O. She is also the fastest one among the three magic knights and second only in offense under Hikaru. Her technique concentrates more on effecting the enemy and boosting her speed. As a Water Knight, Umi specialized in water-related magic spells:

Because Umi's magic is attributed to water, her attacks were focused more on speed and affecting the enemy. 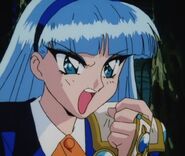 Umi angry
Add a photo to this gallery

Retrieved from "https://hero.fandom.com/wiki/Umi_Ryuuzaki?oldid=2205361"
Community content is available under CC-BY-SA unless otherwise noted.