Prevent Shendu from freeing his brothers and sisters from the Netherworld.
Find the powers of the talismans before Daolon Wong.
Stop Tarakudo, his Oni generals, and the Shadowkhan.
Find the demon chi before Drago.

Uncle Chan is one of the three main characters of animated series, Jackie Chan Adventures. He is Jackie's uncle, Jade's great-uncle and Tohru's magic mentor. Ironically, he is most called Uncle by everyone, therefore his real name is never revealed.

He mostly hits Jackie with two fingers just to do the right thing. Also, he has a variety of catchphrases like, "Magic must defeat magic" and the most famous of all, "One more thing".

Uncle is portrayed as an old man with average height and a skinny build. He has grey hair that appears to spike in many directions. His main outfit consists of white polo under a yellow polyester vest, blue jeans, and brown dress shoes. He also wears small, round, armless glasses on the bridge of his nose.

In his younger years, Uncle looked almost the same as his old-self in terms of body structure, facial features, and hairstyle. The difference was that he had black hair and wore a black long-sleeved, collared shirt under a white vest, white pants, and black dress shoes.

Uncle is known as "Sensei" by Tohru (which is Japanese for teacher), and as "Uncle" by everyone else. He is the uncle of Jackie and great-uncle of Jade. He is a very stereotypical Chinese man. He often talks in third person about himself, draws out words in his speech, and often uses Cantonese in many aspects of his speech, most notably his magic incantation, "Yu Mo Gui Gwai Fai Di Zao" which means "Evil demons and malevolent spirits, be gone!" (in Cantonese). He is also portrayed as very grumpy and often complains about small things. Despite this he is considered to be the wisest out of all the characters in the entire series.

His most common magical items are a dried salamander and dried puffer fish; they both have backgrounds in Asian remedies. His favorite drink is tea, but often complains that it's too hot or cold, and always throws away the cup after a sip. Digestion is of much concern to him, and his favorite food is a mung bean sandwich.

Uncle is known for jumping to conclusions rather quickly. Most of the time Uncle is correct about these conclusions but some of these conclusions may either be wrong or absolutely ridicoulous. Some examples include accusing El Toro Fuerte of being a thief trying to rob his store and claiming that a hotel was terrible because they did not have the ingredients necessary to create Uncle's Chi Spells.

A running gag between Uncle and Jackie is when Jackie does something wrong and Uncle hits him over the head with a two-fingered strike. He has hit other characters such as Valmont, Captain Black, Tohru, Daolon Wong, Hsi Wu the Sky Demon, and, on one occasion, himself (as he had blamed himself for a kidnapping of Tohru) in the same way. Several times, when Jackie is unconscious, he dreams that a ghost head of Uncle is floating above him telling him what's going on and why he should get up. It always ends with Uncle's ghost whacking him over the head as mentioned before. The same dream also actually happens to Uncle in the episode The Dog and Piggy Show.

Uncle is not what one would call technology-savvy, since he does not understand devices such as faxes (he gets all his facts from books), laptops (calling Jade's a "magic waffle iron"), and the World Wide Web. However, ironically, he can understand sending a spell through the phone, but not a piece of paper (as Jackie put it in the Season 2 episode "The Chan Who Knew Too Much"). In the episode "The Shadow Eaters", he is revealed to have a passion for oil painting. His true name is never mentioned, and even Jade's visiting parents call him Uncle.

Born in the year of the Dog (probably 1922), Uncle owns an antique store (which was originally an 8-track tape store), and became a Chi wizard by learning his skills from Master Fong. As a child, he was part of the Seven Little Fortunes opera troupe (which Jackie Chan was part of in real life), and thus received opera school training. In addition, he is an accomplished martial artist in his own right, and according to Jackie (in The Dog and Piggy Show), Uncle himself was just like Jackie at the same age. Apparently, after he became too old for martial arts, he then studied an unknown fighting style that allowed him to knock out opponents with small jabs to the chest or neck, allowing him to knock out tough opponents like Captain Black (utilized in "Day of the Dragon"), often accompanied by his trademark line "You want a piece of Uncle?". He has also stated to have won a Mahjong tournament in 1955.

Uncle's most notable ability is his extensive knowledge of magic.

Uncle had incredible martial arts prowess when he was younger, being able to move like Jackie. However as he got older he started using styles that required little movement, relying on nerve attacks to paralyze or knock out his opponent.

Uncle is allergic to cats. 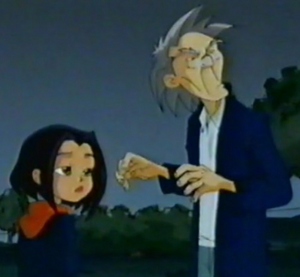 Uncle Chan with Jade
Add a photo to this gallery