Spending quality time with his family.

Professor Charles the Hedgehog, better known as Uncle Chuck, is a brilliant inventor in service to the Kingdom of Acorn on Westside Island and is the adopted uncle of the world hero, Sonic the Hedgehog. Charles is a well known genius who has always used his research and inventions for the good of the world. He is also a friend and colleague of famed Spagonia University academic, Professor Pickle.

An intellectual individual, Charles cares for his loved ones more than he does himself and is typically somewhat quiet, though outspoken when it comes to opposing what he believes to be wrong. However, he is quick to be hard on himself for his mistakes, often to a point far beyond what he should lay on his shoulders even when it's not his fault in the first place. Always willing to provide advice to Sonic and the Freedom Fighters, he shares a close relationship with the young heroes. Bound by a high sense of duty, he is willing to put himself on the line if it means helping others

Uncle Chuck, better known as "Sir Charles Hedgehog", was a well-respected scientist under Sally Acorn's father, King Acorn, in Mobotropolis, having developed the Roboticizer as a means to help people. However, Julian Kintobor, later known as Dr. Robotnik, launched a coup d'etat against King Acorn, taking over Mobotropolis and renaming it Robotropolis, while capturing Chuck and several other citizens to be turned into Robians to serve him, including Chuck's nephew, Sonic Hedgehog. Chuck was livid with Robotnik for stealing his ideas for the Roboticizer and turning it into something it wasn't supposed to be used for, but was tragically made into a Robian himself in front of his own nephew. Though Sonic escaped with Sally and the future Knothole Freedom Fighters in Sally, Bunnie, Rotor, and Antoine, Chuck would remain a loyal servant of Robotnik for the foreseeable future.

About 11 years later, Chuck is still serving Robotnik subserviently, but Sonic was able to restore his uncle's free will with the aid of Power Rings from time to time to get his help before his Robian programming reasserted itself. In the episode "Sonic Conversion", Sally had perfected the De-Roboticizer and tested it on Bunnie to restore her left arm and legs from their Roboticized state. Before they could check to see if Bunnie's restoration was permanent or not, an impatient and over-excited Sonic retrieved his uncle from Robotropolis and brought him back to be De-Roboticized, but the machine broke down, and replacement parts were needed from Robotnik's Roboticizer. After Sonic recovered them, Chuck was successfully De-Roboticized, allowing uncle and nephew to be reunited, where Chuck revealed to Sonic that he knew about everything he did while a Robian, but was unable to act on it due to Robotnik's programming overriding his own free will. Unfortunately, it turns out the De-Roboticization was only temporary, and Bunnie reverted back to her half-Roboticized state during a briefing with Sally, causing the princess to realize to her horror that Chuck would revert back as well. Chuck indeed reverts back into his Robian state in front of Tails and Antoine, before capturing the two of them, sabotaging the De-Roboticizer, and preparing to take them back to Robotropolis to be Roboticized. Sensing his nephew would come to help them, Chuck prepares a Mega Muck trap for Sonic. When Sonic falls into it, Chuck leaves him behind to retrieve later as he uses a repaired Hover Unit to take Tails and Antoine back to Robotropolis. Just as he lands back in the capital, Sonic arrives, having been freed by Sally, Bunnie, and Dulcy, and attempts to get his uncle to fight Robotnik's programming through sheer willpower. After some tense moments, Chuck is able to override Robotnik's programming of his own volition and regain control of himself. While he is still Roboticized, Chuck now had control of his Robian body, and uses this to his advantage by offering to become a spy for the Freedom Fighters, using his Robian state to gather intel on Robotnik's plans for the Freedom Fighters to use against him. Sonic accepts this agreement and leaves his uncle behind as he retrieves Tails and Antoine and returned to Knothole with them after dealing with Robotnik's Shriek-Bot.

Now in control of his Robian body, Chuck proves his worth helping the Freedom Fighters from inside Robotropolis. In "Spyhog", Chuck gathers intel on the fuel tankers set to head out to Robotnik's Project Doomsday in a few hours and passes this intel onto Sonic to deliver to Sally. However, after the sabotage of the fuel tankers by the Freedom Fighters, Robotnik begins to become wary of a spy in their midst, and has Snively scan their headquarters, finding the bug Chuck was using to eavesdrop on their plans. When Chuck later comes to replace it, a Tech-Bot is able to follow him back to his hidden hideout and call in the Swat-Bots to arrest him, despite a decoy ruse when Snively caught Antoine earlier when he tried to help Chuck and Sonic himself under the pretense of earning more praise and adoration from Sally. Once turned over to Robotnik, Chuck refuses to spill any secrets about the Freedom Fighters, but Robotnik simply tries to reactivate his programming to turn Chuck into a loyal Worker-Bot again to tell him what he wanted to know. Luckily, Sonic arrives to save his uncle before he can give away Knothole's location, and they escape. What's more, Chuck had anticipated if his hideout was compromised, and set up a backup one, along with a Tech-Bot disguise as well. With him choosing to stay in Robotropolis to continue his spy work, he entrusts Sally and Bunnie to take care of Sonic for him, and watches them depart in their hotwired Hover Unit, a few tears trickling from his Robian eyes as he watches them go.

In the series finale, "The Doomsday Project", after Robotnik launches his grand master plan with Project Doomsday, Chuck had withdrawn from Robotropolis to regroup with the Freedom Fighters in the Great Unknown, learning of Sonic's failed attempt to destroy Project Doomsday thanks to Robotnik having protected the core of his master machine with diamond-reinforced glass. Chuck suggests using the Deep Power Stones to take it out, and when his nephew argues that they only have one of the stones while Robotnik has the other, Chuck reminds Sonic that, with all of Robotnik's Swat-Bots at Project Doomsday, entering Robotropolis to retrieve the other stone will be easy. When Sonic returns later with the second stone, Chuck is with Sally discussing more intel about the Doomsday Pods. After Sonic and Sally successfully destroy Project Doomsday and presumably kill Robotnik as well, Chuck is with the rest of the Freedom Fighters celebrating their victory, and watches with pride as Sonic and Sally share a kiss that sets off fireworks due to still being imbued with the energy from the Deep Power Stones.

Uncle Chuck was one of the few characters to survive the Genesis Wave after Eggman tried to create a new world. Chuck went through some changes like many of the folks who survived he was no longer Sonic's real uncle. Instead Chuck became his adopted uncle and was seen as a uncle to all the Freedom Fighters since he looked after them when they were young.

Charles was a scientist who served King Acorn his life long friend who was always impressed with Chuck's inventions at some point in his life Charles invented the roboticitor for medical purposes. Charles was also friends the Dr. Eggman, Snively and Naugus until they betrayed him and the king. Charles and the king both believed Eggman's lies when he told them that G.U.N. wanted to go to war with the kingdom. It was easy to believe because G.U.N. and King Acorn's father were at war in the past. However after Eggman and Sinvely betrayed the and Naugus trapping them in the Special Zone also known as the Void. After this Chuck and Rosie escaped the palace with the young Princess Sally gathered as many of the children that they could save and fled Mobotroplis. During their escape Charles and Rosie found Bunnie who was badly injured Charles used his roboticitor to save young Bunnie's life. Charles and Rosie looked after the kids and raised them Charles grew so close to the kids they started to call him uncle. However not long after their escape Eggman found them and stole Chick's roboticitor and used it to turn citizens into robots. 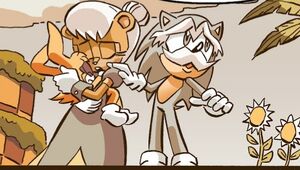