Helping to solve all of the kids in the world's problems

To make kids happy (most of the time succeeds)

Uncle Grandpa is the titular protagonist of the same name series. He is actually in the whole world's uncle and grandfather. When he comes to visit, he makes all the kids' wild dreams come true.

He is a short older adult who wears black overalls with rainbow shoulder straps, a white collar shirt and wears a blue propeller hat that sits on top of his head (which has a prominent lump). He also has a brown mustache, with a tooth sticking out of it, and a large chin. He also wears a talking red fanny pack, known as Belly Bag.

Uncle Grandpa is so naive and foolish to a point where he can easily be fooled/trick/manipulate by his own surroundings, especially Pizza Steve, who constantly uses Uncle Grandpa's dumb and good-nature to earn his praise and obliged to Pizza Steve's demands.

The only person who never tries to manipulate him and always speaks up the truth is Mr. Gus, Giant Realistic Flying Tiger, Belly Bag, Frankenstein and Tiny Miracle.

Uncle Grandpa seems to have a different array of magical powers, that range from time traveling and making clones of himself. Uncle Grandpa is always using these magical powers, with the assistance of his Belly Bag of course. At first Uncle Grandpa's plans seem dumb, but in the end his plans usually work in his favor and he ends up (not always) getting the job done. 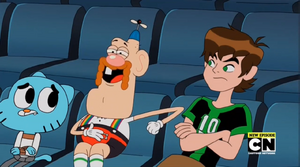 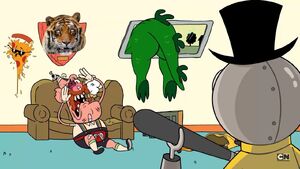 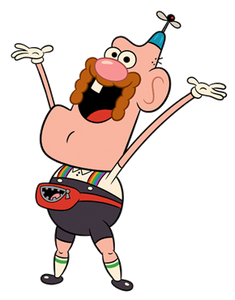 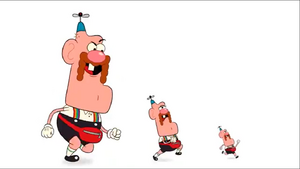