Travel to Peru with the Baudelaires (failed).

Dr. Montgomery Montgomery, otherwise known as Uncle Monty is one of the main characters in the second book in Lemony Snicket's A Series of Unfortunate Events, titled The Reptile Room. In the film, he was played by Scottish actor Billy Connolly.

Montgomery Montgomery was a very short, chubby man, with a pleasant demeanour and a jolly character. He could be very serious when he wanted to, such as when he thought Olaf was an imposter. He was rather intelligent, but not clever enough, because he did not recognize Count Olaf and believed he was a herpetological spy rather than a criminal.

He may have been a V.F.D. member, because of his house's underground connection with the Quagmire mansion. But he did not learn all the code, he didn't know the Sebald Code, and thus met his fate.

Montgomery then explains their situation that soon they'll be going to Peru, and he wants them with him. Montgomery is very excited about the expedition, they'll be leaving on the Prospero ship at five in the afternoon. He spends the next week preparing for the trip. Montgomery encourages the delighted Baudelaires to thrive in their areas of expertise - Violet builds the snake traps and repairs them; Klaus reads about Peru and Peruvian snakes; and Sunny bites rope into sizeable pieces. The Baudelaires bond with Montgomery and he with them. They spend the day working and talking and after dinner they go to the movies each night. All is good, until Count Olaf appears.

Count Olaf comes disguised as "Stephano" a lab assistant, and he intrudes on the Baudelaires and their happiness. They aren't fooled, and recognize Stephano immediately as Olaf. But Montgomery is fooled, and he welcomes Olaf pleasantly. He is delighted by Olaf's speeches and stories.

However, he does not entirely fall for the trick. As the Baudelaires warn Montgomery that Stephano is Olaf, Montgomery interrupts, saying he suspected Olaf of treachery, and that he may be a herpetological spy. This angers the Baudelaires because of Montgomery being so wrong. Montgomery is almost killed by a brass lamp falling out of Klaus' room (pushed by Count Olaf) and he blames the children for it. But Olaf confronts the kids and says soon Montgomery will be gone.

Later, Montgomery takes them all to see the movie Zombies in the Snow, which has a V.F.D. message encoded in the script warning Montgomery of Olaf's impending treachery, which Montgomery fails to pick up, because he didn't know Sebald code.

Later that night, as the scared Baudelaires worry about what Olaf's threat meant, Olaf sneaks up on Montgomery and kills him by injecting him with snake venom of the Mamba du Mal, the new snake Montgomery found.

Montgomery's role in the movie is similar, except he is more family-orientated and claims to have lost his family in an arsenic fire. Montgomery bonds with the Baudelaires and he is in a hurry to leave to Peru, which is unlike the book. He says he is leaving later that week, and the Baudelaires spend a few happy days there, preparing for the expedition but soon Olaf turns up. He threatens the Baudelaires but they warn Montgomery of Olaf's treachery. He however suspects Olaf of being a spy from the herpetological society. The Baudelaires warn Montgomery by sending his snake to him with "imposter" inked on it. Later, as Montgomery is musing over how he'll miss one of his favourite snakes, Olaf kills him. 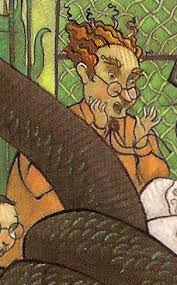 Montgomery in the book 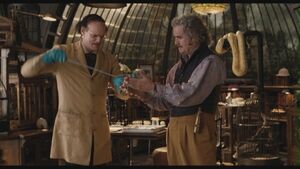 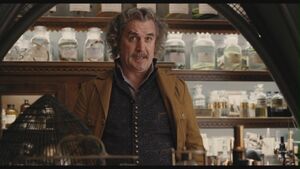