Uncle Sam is a DC character who is officially described as the embodiment of the American Dream, his power dependent on the country's belief in liberty and freedom: he has often been depicted as a superhero of sorts in DC, defending his land from threats and is the leader of the Freedom Force.

He is based on the real-life Uncle Sam, Sam Willson, a man who gave and collected donations for the army and was later immortalized as a cartoon character on enlistment posters and today is commonly used as a symbol for America in art and media.

Uncle Sam first appeared in National Comics #1 (July, 1940), which was published by Quality Comics during the Golden Age of Comic Books. He was depicted as a mystical being who was originally the spirit of a slain patriotic soldier from the American Revolutionary War, and who now appears in the world whenever his country needs him. The character was used for a few years from 1940 to 1944, briefly receiving its own series, Uncle Sam Quarterly. During this time, he had a young, non-costumed sidekick named Buddy Smith.

DC Comics acquired the character as part of its acquisition of the Quality characters in the 1950s, and he was used as a supporting character in Justice League of America in the 1970s. This established Uncle Sam as the leader of the Freedom Fighters, a team of former Quality characters that briefly received its own title.[1] This team was initially based on a parallel world called Earth-X, where World War II had lasted into the 1970s.

Uncle Sam's origin was rewritten somewhat in The Spectre,[2] where Uncle Sam is described as a spiritual entity created through an occult ritual by the Founding Fathers. This "Spirit of America" was initially bound to a powerful talisman and would take physical form by merging with a dying patriot. The new origin states that the Spirit of America had taken human form as the Minute-Man during the Revolutionary War, Brother Jonathan in later conflicts and, during the American Civil War, had been split in two as Johnny Reb and Billy Yank.

The Spirit first assumed its now-familiar Uncle Sam incarnation in 1870, when it resurrected a political cartoonist who had been killed by Boss Tweed. The second host of Uncle Sam fought in World War I. A third (the character's Golden Age incarnation) was a superhero during World War II but vanished at the end of the war, erasing any subsequent appearances from the fictional history of the DC Universe (although most of them had already been erased by the Crisis on Infinite Earths.) In The Spectre, the Spirit is resurrected in a new costumed form called the Patriot, but later reverts to Uncle Sam in a Superman issue.[volume & issue needed]

A 1997 Vertigo series features the character with the persona of a street person.[3] A similar notion was suggested by Alan Moore in his 1980s crossover proposal Twilight of the Superheroes; this interpretation was inspired by the satirical novel The Public Burning by Robert Coover, which also features a superheroic version of Uncle Sam.

In Infinite Crisis #1, the Freedom Fighters are attacked by the Secret Society of Super Villains. Three of the Freedom Fighters, Human Bomb, Phantom Lady, and Black Condor are killed in the battle. Uncle Sam himself seemingly dies at the hands of Sinestro. The other team members are brutally injured but survive. Uncle Sam is seen face down in rainwater.

However, when the dead heroes are found strung up on the Washington Monument in Infinite Crisis #2, Uncle Sam is missing.

The character's latest incarnation appeared in the first issue of Uncle Sam and the Freedom Fighters, and spends the first few issues of this new series attempting to form a new version of the Freedom Fighters. This new Uncle Sam emerges from the Mississippi River at the same time as Father Time is elsewhere planning the future of S.H.A.D.E. with new incarnations of the Freedom Fighters members. Uncle Sam, disturbed by the deadly force used by the new versions of Phantom Lady, The Human Bomb, Doll Man, and others, successfully recruits these metahumans into his new Freedom Fighters team, which results in Father Time ordering his remaining S.H.A.D.E. personnel to pursue and kill Uncle Sam and his team. Although Uncle Sam is shown to be against killing, particularly rebuking Doll Man for murdering a crime lord in front of the man's young grandson (in issue #1), Uncle Sam is not against using deadly force when necessary.[4]

He is also seen in Final Crisis #4 and classified as Corrupted when Alan Scott is looking for remaining superhumans to fight Darkseid's forces.[5]

Uncle Sam shows up in the Blackest Night crossover, helping many other superheroes fight the returning dead. This includes the slaughtered incarnation of the Freedom Fighters.[6]

A human African-American version appears in The New 52 (a reboot of the DC Comics universe) title Human Bomb. One of the S.H.A.D.E leaders he calls delivers an order to capture Michael Taylor.[7]

In 1998, DC published under its adult imprint Vertigo a two-issue prestige format comic simply titled Uncle Sam, written by Steve Darnall with painted artwork by Alex Ross. The book does not appear to be set in the standard DC Universe (though a picture of Superman can be seen when Uncle Sam discovers the shop in the middle of nowhere), and depicts Uncle Sam as a ragged old man who is tormented by visions of historical episodes and modern aspects of the United States at its worst. Uncle Sam is forced to battle a dark doppelganger of himself based on corruption, deceit, and oppression, with the identity of the United States at stake.

In an alternate DC timeline appearing in Superman/Batman, Superman and Batman have been raised by Cosmic King, Lightning Lord, and Saturn Queen, the three original members of the Legion of Super-Villains, and have turned the Earth into a totalitarian state. Uncle Sam becomes Green Lantern when Wonder Woman gives him Abin Sur's ring, as Hal Jordan is dead in this reality. When Wonder Woman first encounters this Uncle Sam, he is visually very similar to the Uncle Sam from Alex Ross' miniseries; once she uses her magic lasso to reveal the truth to him, he reverts to his classic persona and costume.

In the final issue of 52, a new Multiverse is revealed, originally consisting of 52 identical realities. Among the parallel realities shown is one designated "Earth-10". As a result of Mister Mind "eating" aspects of this reality, it takes on visual aspects similar to the pre-Crisis Earth-X, including the Quality characters.

Based on comments by Grant Morrison and the fact that a Nazi version of Superman is depicted in the scene, this alternate universe is not the pre-Crisis Earth-X.[8]

On Earth-11, a world of reversed genders, a female version of Sam called Columbia leads the Freedom Fighters. 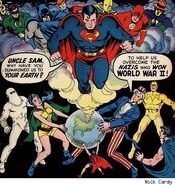 Add a photo to this gallery
Retrieved from "https://hero.fandom.com/wiki/Uncle_Sam?oldid=1557667"
Community content is available under CC-BY-SA unless otherwise noted.