Shooting fireballs
Flight
Transormation
Ability to Change colors depending on her mood
Ability to change her cheeks (in Unikitty!)

Optimistic Hybrid
Unikitty is a half-unicorn and half-kitten (hence her name) who a major character of The LEGO Movie and The LEGO Movie 2: The Second Part, and the main protagonist of the TV show of the same name.

She wants to help Emmet, Wyldstyle, Batman, Benny, Metalbeard, and Vitruvius to save the Lego world from the Evil Lord Business. She usually tries to be sweet all of the time, but when she gets mad, she becomes crazy and deadly.

Princess Unikitty lives in Cloud Cuckoo Land, where she and the Master Builders reside in safe and secret harmony, even though they know it is a matter of time before that ends. Some things like Lord Business and Robo SWAT do make Unikitty short-tempered, but she will do anything to help Emmett and the Master Builders stop Lord Business from gluing the world with the Kragle.

She first greeted Emmet and the gang in Cloud Cuckoo Land and took them to the "Dog", which was a temple where the Master Builders were gathering. However, after they were attacked by Bad Cop and the Robo SWAT force, they were forced to escape underwater, much to her devastation in seeing her home destroyed. She then joined the plan to infiltrate the Octan Tower, disguising herself as Biznis Kitty, until being captured at the last second. Soon the gang escaped, and in the battle of Bricksburg, Emmet was attacked by Micro Managers which made Unikitty angry enough to lose control of her normally happy demeanor. Unleashing her fury on the robots, yelling at them that they need to be more friendly, she provided the distraction needed to help Emmet get to the Kragle-izer.

Unikitty is seen in her warrior form sleeping, later is woken by Wyldstyle. When Wyldstyle gets ready to look for General Mayhem's space craft, Unikitty Transforms into UltraKatty so Wyldstyle can ride on her. Then later again, they get taken by General Mayhem.

Unikitty, Metalbeard, Batman, Wyldstyle and Benny were in Mayhem's Spacecraft and were brought to the Systar system. They meet Queen Whatevra Wa'nabi. While in the "not Evil" song, after Queen Watevra Wa’Nabi says some things she would do for Benny and Metalbeard, Unikitty wants to have Wa'nabi to do something for her. Queen Wa'nabi says about what is the most glitter that unikitty can imagine, which Unikitty response is "a lot!" Queen Whatevera says "times that fly infinity!" Unikitty gets excited. When Wyldstyle's hair was revealed to be Light blue with Pink "highlights", She says it looks cute.

Later in a music therapy room, Unikitty was seen to been "brainwashed" by the "Catchy song" and has a form as Disco Kitty. She tells Wyldstyle to "join the party" and to "don't be a Grumple Dumpus." When General Mayhem explains to Wyldstyle that they just want to make peace with them. (which means that Benny, Metalbeard and Unikitty are not "brainwashed") When the wedding is starting, Unikitty, benny and Metalbeard tried to stop Emmet from ruining the wedding, which they failed at - Miserably. This causes "Our-Mom-Armageddon" to happen. Shown in Rex Dangervest's backstory, a Unikitty Lego figure is seen being played by ianca, along with Batman, General Mayhem, Benny and Wyldstyle.

Everyone (except Emmet and Rex Dangervest) were put in a Lego bin. Later, they worked together to save Emmet from Rex Dangervest. In the spacesip scene, unikitty was in spaceship form. Unikitty coughs up and fires a glitter hairball missile out of her mouth to take out one of Rex's interceptors. near the ending of the movie you could see Unikitty's new house (which is shapes just like herself) and is seen with Metalbeard, Benny, Sweet Mayhem, Queen Whatevra Wa'Nabi, Emmet, Wyldstyle, Batman, and Unikitty herself on a lovely looking platform. Unikitty pops up, smiling as Emmet gasps when he sees Wyldstyle on an album of "Everything is Awesome" in the end.

Unikitty is very ecstatic and energetic, and is easily excited while meeting with new people such as Emmet. Despite being happy most of the time she has a sad side, or as she describes it "the opposite of happiness"(also known as her angry side) and despite her best efforts to keep positive, she was reduced to tears over witnessing Cloud Cuckoo-Land destroyed. Unikitty has a deadly temper, something which she has a difficult time controlling, but this actually ended up helping them during the final battle between President Business.

Personality In the Television Series:

The best way to describe her in the Television Series is that Unikitty is literally a real life example of an incarnation of pure benevolent. Unikitty's overall personality is the polar opposite of every negative aspects, she is resourceful, helpful, extremely kind-hearted, very energetic, friendly, enjoys making friends, cares for others, very considerate, always makes the right choice, and is considered to be a person who gives peoples infinite chances to redeem themselves. 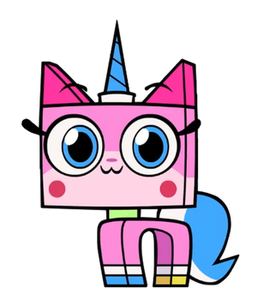 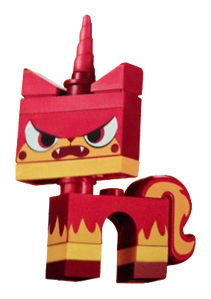 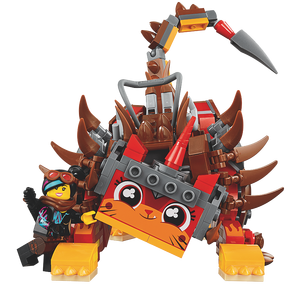 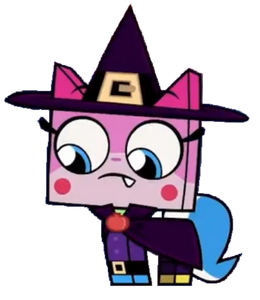 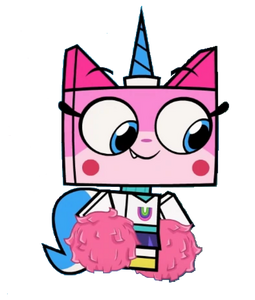 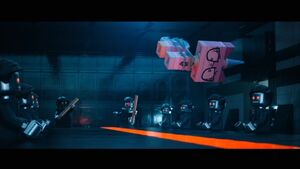 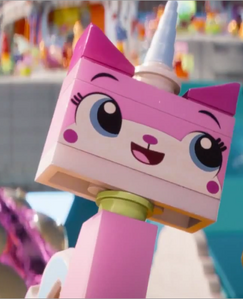 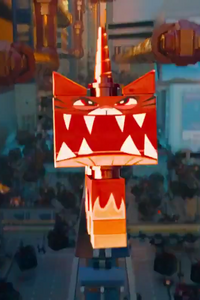 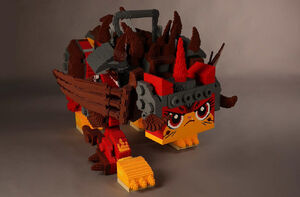 Unikitty squeezes her ginormous body in through the gate