Defeat the Covenant Empire, the Flood, and the Created

Global Protection, Cosmic Protection, Protectors, Military Heroes
The United Nations Space Command, more commonly known as the UNSC, is a military, exploratory and scientific agency of the Unified Earth Government which are one of the main heroes in the Halo franchise.

The UNSC formed halfway through the 22nd Century as a remnants of old cultural ideologies clashed for supremacy in the Sol System and mainly oversaw United Nations military operations in space. The UN massively militarizing it's off-world colonies via propaganda and then defeated communist and fascist forces in the "Interplanetary War" which consisted of several side-battles that took place on Mars, the Jovian Moons and the South American rainforests. Although the Inplanetary War brought great suffering and death unto Earth and its colonies, it united Humanity's militaries into a common, armed force by the end of the 22nd Century.

The UNSC then fought one of the greatest enemies yet: The Covenant, an alien empire who want to activate the Halo rings which will destroy all life in the galaxy. So the UNSC fought the Covenant for years until the Elites sided with Humanity and eventually destroyed the Covenant Empire by assassinating the High Prophet of Truth.

The UNSC has it's roots in the first World War, which led to the creation of the League of Nations. The League of Nations led the formation of the United Nations after World War 2. The UNSC itself was formed and fashioned as the result of a series of a brutal conflicts across the Solar System between 2160 and 2164; most prominent among them were the Jovian Moons Campaign, Rain Forest Wars and a series of battles on Mars.

The UNSC was planned as an emergency military government. The United Nations clashes with dissident political movements, the most important of which were "Koslovics" and "Frieden" began the crisis that led to the formation of the UNSC. The Frieden movement was a fascist organization based on the Jovian Moons, a group that recieved backing from some corporations operating in the United German Rupublic on Earth. Their ideological opponents, the Koslovics, formed a Marxist-Leninist group centered around the leadership of Vladimir Koslov around the same time.

The war began with an attack on United Nations colonial advisers on the moon of Io, one of the moons on Jupiter, but would spread to Moons and parts of South America in the Rain Forest Wars. These events culminated in a UN build-up in the mid to late 2160s, which would result in the UN establishing a unified military and a permanent Unified Earth Government as an ultimate power to lead the Human race by 2170.

The UNSC Defense Force is the defense force/military force of the UNSC. 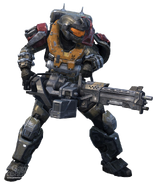