Short sword, spear and many other weapons, infiltration

Protect and defend Daenerys Targaryen and her allies

The Unsullied (Dovaogēdys in Valayrian) are an army of eunuchs from A Song of Ice and Fire and its TV series adaptation Game of Thrones. The Unsullied were enslaved and trained by the Good Masters of Astapor, taken from their families at a very young age - from infancy up to the age of five. Castrated by the Good Masters when first taken as Unsullied, the boys were trained from dawn to dusk in the short sword, spear, shield, and various infantry tactics. The training regime was brutal, with about 75% of all boys taken for training not surviving the process.

In order to complete their training and become Unsullied the prospective Unsullied would have to go to a slave mark with a piece of silver, find a baby and mother, and kill the baby in front of the mother. The silver would then be paid to the baby's owner, not the mother.

To reduce their individuality, the Masters did not allow the Unsullied to have permanent names, the Unsullied were made to select their names out of a jar each day, and the names were designed to be degrading to them.

The Unsullied were regarded as some of the finest soldiers in the world. Four hundred years before the War of the Five Kings an Unsullied force saved the city of Qohor from a much larger Dothraki force. Despite taking massive casualties the Unsullied saved the city - with the surviving Dothraki tossing their hair braids on the ground in front of the Unsullied as they departed. While efficient soldiers who would follow any orders given, the lack of sexual organs meant Unsullied were not bloodthirsty rapists - they would do what they were ordered to and nothing more.

Following the sack of Astapor Daenerys gave the Unsullied their freedom. All of the Unsullied willingly followed her, first to Yunkai and from there on to Mereen, fighting to end the widespread slavery going on in the region. Asked by Daenerys to choose a commander for themselves, they selected Grey Worm - a man who became a trusted advisor to Daenerys. 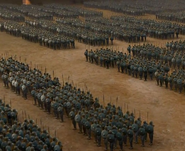