Heroes Wiki
Register
Don't have an account?
Sign In
Advertisement
in: Candidate for Deletion, Ben 10 Heroes, Aliens,
and 11 more

Upchuck is the Omnitrix's DNA samples of the Perk and Murk races of Gourmand from the destroyed planet Peptos XI and currently Peptos XII.

Perk Upchuck has green skin, six sprout-like growths on the back of his head, a dark-green patch of skin on his head, light-green skin on his face and belly and a crooked teeth overbite. He has whisker like lines on his face, and a green tail.

In the original series, Perk Upchuck had white eyes and wore a black open-front suit with white over-sleeves and white bands around his legs and white padding under his three-toed feet. He wore the original Omnitrix symbol on his left hand.

In Omniverse, 16-year-old Perk Upchuck does not wear clothes and his eyes are recolored green. He wears the Omnitrix on his stomach.

11-year-old Perk Upchuck looks almost the same as the original series, but his eyes and original Omnitrix symbol are recolored green and he now has bare feet with short claws.

Murk Upchuck has swampy-green skin, a tanned stomach and muzzles, black sprouts and black-green spots on his tail, limbs, and back. His eyes are sharp and green, he has whisker-like lines, his teeth are more aligned with visibly sharp canine teeth and his tail is short and straightened, as opposed to Perk Upchuck's curled tail.

In Heroes United, Murk Upchuck's black stripes on his face were longer, reaching his mouth, and he only had two lines instead of three. His claws were attached to his hands through finger stubs.

In Omniverse, Murk Upchuck resembles his previous design, except that his claws are longer and bigger, his sprouts are brighter, and he has less spots on his body. He now has only two teeth in the shape of an underbite, and the markings on his face are thinner and contained by the face, no longer spanning the head. Murk Upchuck wears the original Omnitrix/Ultimatrix/Omnitrix symbol on his stomach.

Perk Upchuck first appeared in The Visitor, where he was unlocked by Xylene and defeated the Mechadroid.

In Ben 10: Secret of the Omnitrix, Perk Upchuck was defeated by Myaxx.

In Ben 4 Good Buddy, Perk Upchuck battled the Road Crew and was defeated by Turbine.

In Ben 10 vs. the Negative 10: Part 2, Perk Upchuck defeated the Forever Ninja and Driscoll and accidentally destroyed Mt. Rushmore in the process.

In Evil's Encore, Perk Upchuck stopped Dr. Animo's control of the Plumber Base and accidentally destroyed Mt. Rushmore in the process for the second time in a row.

In From Hedorium to Eternity, Perk Upchuck accidentally broke one of Mr. Baumann's car windows.

In A Fistful of Brains, Perk Upchuck was defeated by Ultimate Albedo.

In For a Few Brains More, Perk Upchuck ate Crabdozer before spitting out Ultimate Panuncian.

In The Rooters of All Evil, Perk Upchuck fought the Rooters.

In No Honor Among Bros, Perk Upchuck defeated Rook at the Golden Fist Tournament.

In A New Dawn, Perk Upchuck appeared for a short time when Ben was cycling through his aliens.

Murk Upchuck first appeared in War of the Worlds: Part 1, ​where he was unlocked by the Master Control. Murk Upchuck battled an army of DNAliens and unsuccessfully attempted to destroy the Hyperspace Jump Gate alongside his teammates before switching into Way Big.

In Vengeance of Vilgax: Part 2, Murk Upchuck fought and captured the escaped Chromastone.

In Duped, Arrogant Ben used Murk Upchuck to battle Urien, but was defeated.

In The Purge, Murk Upchuck was defeated by the Forever Knights.

In Ben 10-Generator Rex: Heroes United, Murk Upchuck ate the Alpha Nanite's container to transport it out of Rex's dimension.

In Store 23, Murk Upchuck was one of several aliens Ben Prime was showcasing for Ben 23.

Both Upchucks have a limit to how many big objects they can swallow at once. They also become slow and excessively when they eat a lot of things. Otherwise, they are somewhat quick, considering their small size.

If either Upchuck does not spit out something they eat, they will get very fat and rendered immobile until they spit it out.

There is a limit to the kinds of energy either Upchuck can ingest, as the energy beams of an Evolved Galvan made them inflate into a ball.

Either Upchuck can be temporarily immobilized by a Necrofriggian's ice breath until they thaw themselves free using their slime.

Despite being able to eat a Celestialsapien, neither Upchuck can gain the latter's powers in any form or way. 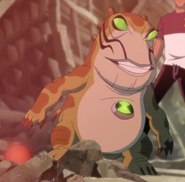