Heroes Wiki
Register
Don't have an account?
Sign In
Advertisement
in: Candidate for Deletion, Ben 10 Heroes, Aliens,
and 11 more


Note: This is the Reboot version of Upgrade, For his Prime Counterpart, See Here

He is voiced by David Sobolov.

He has a purple/dark purple color scheme and no longer has a computerized version of Ben's voice.

Vilgax intends to use lava from Mount Megaladon to recharge his ship, the Chimerian Hammer, and restart his conquering spree. Ben, regardless of his current state, engages Vilgax in battle. The tentacle-faced villain becomes interested in possessing the Omnitrix rather than destroying it, after seeing what it can do to a weak human boy like Ben. While at first hampered by his inability to predict which form he'll become next, Ben is able to turn the tides by Upgrading the Omnitrix, supposedly sacrificing the Galvanic Mechamorph. Able to take on any form he desires, the boy defeats Vilgax and destroys his ship.

The Fulmini Empire and their leader, the High Override, have been manipulating Ben to invade Earth and use the Omnitrix as a gateway. Ben and Vilgax team up, entering the Omnitrix and allying with a heroic fusion between his DNA and Upgrade's damaged DNA calling itself Glitch. Though the High Override banishes Vilgax to the Null Void, Team Tennyson are able to free Ben from his control and purge the Fulmini, from the watch, causing it to reboot. Glitch survives the reboot by escaping the Omnitrix in the Rustbuggy, joining the family as Ben reclaims the Omnitrix, now aware that he really doesn't know much about it.

After a serious battle with the High Override, Ben's half-Upgrade, half-human hybrid, Glitch becomes merged with the Rustbuggy and is a part of the Tennyson family and joins them on their road trip. 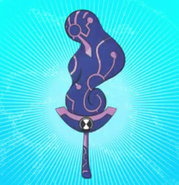