Urara Shiraishi the deuteragonist of the manga Yamada-kun to 7-nin no Majo by Yoshikawa Miki. Shiraishi discovers she and fellow student Ryuu Yamada are witches when they accidentally switch bodies one day. She and Yamada soon discover the body swap was not some random phenomena but a power they possessed as witches and that there were a total of seven witches at Suzaku-high. At the behest of student councilman Toranosuke Miyamura Shiraishi forms a Supernatural Studies group with Yamada, Miyamura  and later a girl named Miyabi Ito. Shiraishi is made club president and together the club investigates the the limitations of witch powers, attempts to identify all seven witches and the power unique to each witch. Shiraishi is the most level headed of the group, she is also the most emotionally reserved of the group and at times seems outright emotionless but deep down Shiraishi is a deeply sensitive person.

Shiraishi's unique power as a witch is the Body Swap ability, the ability is triggered when Shiraishi kisses someone, however her power can not affect other witches, with the exception of Yamada. Shiraishi's powers are mental and attached to her no matter who's body she is in. Aside from her witch power Shiraishi is a highly intelligent and an A+ student. Shiraishi studies whenever she can which is part of why she is so level headed. Since Shirashi cares more about spending her spare time catching up on school work she is the only member of the Supernatural Studies Club that keeps from getting side-tracked by the various mischief to be had with witch powers. 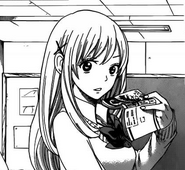