Well aware of Ryotaro being a Singularity Point, unaware he was used by Ryutaros at the time to hide his presence, Urataros purposely made a contract with Ryotaro. Though he says it is to evade the loneliness of being outside time, Hana later debunks this entirely and that Urataros has no interest in destroying the timeline like the other Imagin. Urataros soon redeems himself by lying and acting like a lowlife to indirectly convince Daiki to tell the truth, although it seems only Ryotaro saw through it. Urataros then becomes a full time passenger when Ryotaro decides to share his ticket with him.

During the events of Kamen Rider Den-O: I'm Born!, Urataros possesses the Ryotaro that Yuto brought to the Mesozoic for the Climax Scene. This results in Urataros fading from existence were it not for Ryotaro's feelings condensing his remains into the K-Taros, restoring him to normal while allowing Urataros to form the right shoulder armor of Den-O's Climax Form until his synch with Ryotaro was negated. However, his power then could be accessed in the DenKamen Sword's Ura-Rod Mode. On his own, Urataros can perform Rod Form's finisher, Solid Attack, though his variation is shown as a sliding kick to the target rather than a flying side sick. He can also perform his version of the Den-Rider Kick.

After Kintaros' departure from the Den-Liner, Urataros seemingly betrays the rest of the crew by allowing the three New Mole Imagin that stowed on the Den-Liner to continue planting their bomb on the Machine Denbird as well as strand the gang in January 9, 2007. However, after a few physical confrontations with Momotaros for the Rider Pass, Naomi and the other discover that his betrayal is actually a ploy.

Urataros then borrows the Den-O Belt and transforms into Den-O Rod Form, destroying one of the Imagin before returning the belt to Ryotaro and remaining in the past to fight off the remaining wave of Imagin as their reinforcements arrive. He is retrieved by Naomi for the final battle and is the third to fight the Death Imagin as Den-O Rod Form, with power utilized by Sword Form for the final blow. Urataros then joins the Den-Liner Police, helping in the fight against Negataros and later assumes Rod Form (on his own again) during the epic battle against the revived Imagin. 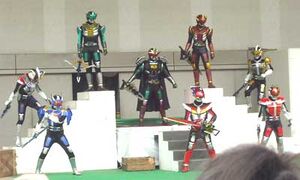 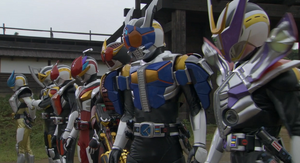 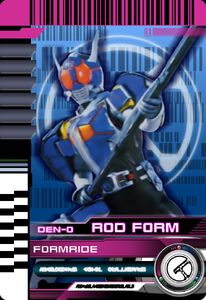 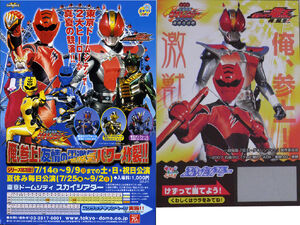 Retrieved from "https://hero.fandom.com/wiki/Urataros?oldid=1781767"
Community content is available under CC-BY-SA unless otherwise noted.