Complete his Rite of Passage (succeeded), Help Shepard defeat the Collectors and Reapers

Urdnot Grunt is a squad-mate and main character in the Mass Effect video game series, first introduced in Mass Effect 2. He is a tank-bred krogan super soldier created by the Krogan scientist Okeer. After Okeer's death, Grunt is brought onboard the Normandy and awakened by Commander Shepard, subsequently becoming a member of his/her squad.

Grunt is a genetically engineered Krogan build in a lab by the Krogan warlord Okeer. Originally investigating the genophage, Okeer realized that surviving the genophage had become the only benchmark for a good krogan, which was weakening the species as a whole. He then decided to create the perfect pure soldier. He hired the Blue Suns mercenaries, and even acquire technology from the Collectors to complete his creation. Commander Shepard tried to recruit Okeer, but died from the toxic gases the Blue Sun mercenary Jedore released on his lab, while he managed to save his creation, Grunt. Grunt is taken to the Normandy and Shepard wakes him up from his bred tank. Grunt agreed to join Shepard's team.

Soon, Grunt starts to feel an uncontrollable rage, one that angers him, as his anger is by choice, not illness. (Something he blames it on). So Shepard goes to the Krogan homeworld to speak with either Urdnot Wreav, or Urdnot Wrex, and after seeing him it seems Grunt needs a Krogan ritual that will make him an adult, which he does, and he passes. After this he and Shepard take on the Collectors, but both could die depending on game-play.

He can come back in Mass Effect 3, where he is in command of Aralakh Company, and Shepard could help him on his mission. Grunt fights in the final battle, and has a last discussion with Shepard via intercom.

Even during his first moments of life, Grunt knows how to speak fluently, due to Okeer's voice teaching him all of the things he'd need to know. Initially, he is hostile towards the Commander, openly stating his intention to kill him/her, though he joins the crew after seeing his/her strength. Among Okeer's last words, he chooses 'Grunt' as his name, saying that he likes it for its simplicity and the others are just big words that mean nothing to him. In Grunt's mind, Okeer is merely a voice in the tank, and he shows nothing but animosity towards his creator, considering Okeer to not be worthy of him.

Somewhat in keeping with his race's stereotypes, Grunt is both violent and highly unpredictable. He often becomes impatient and charges recklessly into the midst of his foes, (unlike more disciplined krogan fighters like Urdnot Wrex) without Shepard's orders. However, despite coming off as unstable, volatile, and uncaring as to who lives or dies, Grunt is not without his depth; he makes a point of saying that his life requires meaning and that he seeks to challenge and fight strong enemies. In effect, it is more fighting he enjoys, rather than killing. Grunt also has a certain degree of existential angst, feeling that, while other great Krogan warriors of the past earned their accomplishments through deeds of valor and strength, Grunt was given all of the best attributes and knowledge of other Krogan from the start. As such, he privately feels unworthy of what he's been given.

While he may not look it at first glance, Grunt is actually very well-educated; besides the reason he chose 'Grunt' as his name over something more impressive, he has the military knowledge of several krogan warlords, which was implanted into him when he was being created. These include Kredak, Shiagur and Veeoil. He also develops an interest in classic Earth literature, such as the work of Ernest Hemingway. Grunt is also very disappointed by the dismal state of Tuchanka, saying that it's barely worth standing on and even the tank he was once contained in is preferable. If he has already become a part of Clan Urdnot at that point, however, he expresses faith that his clan will be able to change the planet for the better.

Like most krogan, Grunt has a strong dislike for turians, hating them for what they did to his species, and considering a bunch of them being brutally murdered in retribution for the death of the aforementioned Shiagur, which happened shortly before the Krogan Rebellions ended, a fitting punishment. However, he only hates turians as a species and is not prejudiced towards individuals of the race; if warned not to start anything with Garrus, Grunt states that Garrus is just one turian and part of Shepard's 'clan', and therefore he does not hate him.

Grunt has a massive amount of respect for the Commander, not at all caring that he/she is a human; when questioned by the Blood Pack member Garm why he follows a human, Grunt states that Shepard is the strongest warrior he's seen and teaches him everything a krogan commander can and more. Even after becoming a member of Clan Urdnot, Grunt makes it clear that he is loyal to Shepard first and foremost, referring to him/her as his 'battlemaster' and stating that he/she has no equal. He also doesn't tolerate anyone insulting Shepard, which is why he refuses to join Gatatog Uvenk. 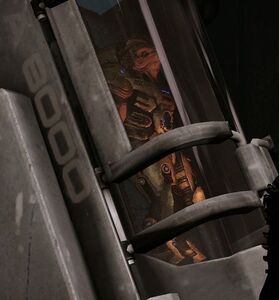 Grunt in his tank 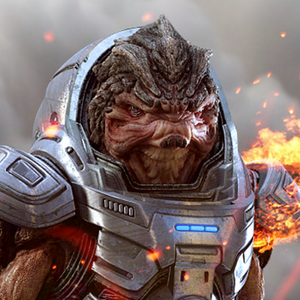 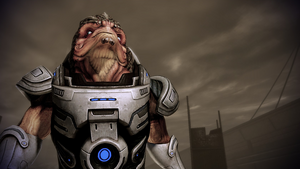 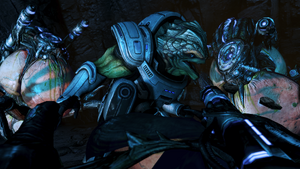 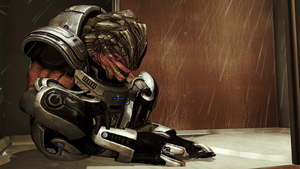 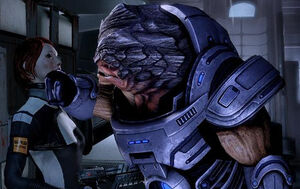 Grunt holding Shepard against the wall 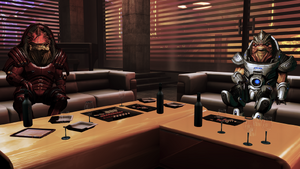