Urii is a boars and the youngest member of the Eto Rangers. His Eto Ranger designation is 12 because he came in first in the race that decided who would become Eto Rangers.

At the start of the series, Urii and the rest of Eto Rangers entered the race in order to make it to the finish line. Unfortunaltely, the animal heroes are having fun in the race. Suddenly, the darkness arrives to attack the world of Mugen ruled by Princess Aura. When the fun was interrupted, the darkness begins to grow. When Eto Rangers are summoned by Princess Aura. The Animal heroes are ready to save the novel worlds from the Evil-Spirited Monsters.

Urii is a wimpy pig with the foolish sense of cowardice. Although, he easily lacks courage. However, the cry causes him to unleash the blast against the enemies with Whee Blast by saving the heroes during missions. 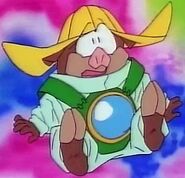 Add a photo to this gallery
Retrieved from "https://hero.fandom.com/wiki/Urii?oldid=1994101"
Community content is available under CC-BY-SA unless otherwise noted.