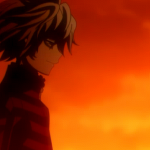 The Anguished One has curly white hair and a very pale complexion. He is always squinting, giving him a sleepy appearance and white make-up/eyelashes around his eyes. He wears a red and black striped shirt with a frilled undershirt, having a design similar to the ship possessed by Alioth, along with matching shoes and black pants.

His true form as a Septentrione takes the appearance of a cube with red and black stripes not unlike his shirt, encased in a blue frame. When he shifts into a different form, it resembles a crystal with the same red and black striped pattern, with wires wrapped around the middle.

In the anime, Alcor prefers to do battle in his human form, using razor-sharp tentacle-like wires similar to that seen in his Septentrione forms. He also briefly slips into his cube-shaped Septentrione form to defend himself from an attack, much like how that form in-game holds resistance to almost every attack.

He has a strange fascination with people. Although he has a very sinister appearance, and his motives can come across as evil, he is actually a very kind person. The Anguished One is very fond of the Protagonist to the point where he takes everything he says seriously, even if it is obvious to other people that the Protagonist is joking.

In the anime, like most characters, he has not changed much, but is much more direct on giving messages and clues without any intention to hide his true nature as a Septentrione. He is always calm every situation and almost never seen not smiling, even when he is saddened. The only time he is shown angry is when Bifrons almost disobeying his order. He greatly cares for humans and wishes for the best for them. Unlike other Septentriones, Alcor is capable of feeling emotions. This initially made him question and doubt his own existence as a mere mechanism of Polaris. It is through his interaction with Hibiki and his friends that he is finally convinced that he is not just a mere system and his will is of his own, not due to Polaris.

Retrieved from "https://hero.fandom.com/wiki/User:Anguished_One?oldid=1945140"
Community content is available under CC-BY-SA unless otherwise noted.