Axl Jet (see my real name above this page)

Looking for cool heroes instead of villains (because there is an administrator who deletes some articles with copyright violation or fan fiction in Villains Wiki) to make this wiki successful and improve to be the best guy in the history.

Normal badass, Passively Empathetic
Most heroes don't think they're good. They think they're villains... Just kidding cuz I made a silly joke! Anyway, welcome to Heroes Wiki and I want to see who will be those to fight against the evil ways by the awesome times. Also with my favorite characters instead in Villains Wiki. Welp enjoy what happens to the history of inspirational stories, guys.

Based on his creator's real-life counterpart, Axl Jet is once the Philippine-born man of his adoptive patriarch family of Baños. He will be there in America during his futuristic events and also, he's fully kind as he appears to be a good special person. But sometimes, he committed every mistakes before he will be learned or amended from them in the rest of humanity. Since then he used to become a computer programmer if he wants to graduate in school life and he remembers many experiences from childhood like he wanted to play both video, computer and arcade games, traveling the most beautiful places anywhere and learning things in programming technology (yep, all of them are my additional hobbies). For the fictionalized times, he will assign to the military subsidiary of Recom Revolutionary Army called Recom Hero Squad, especially the foundation in Tycoon City (the city of mingle). Then he joins up with his best friend Guy Rawkins and other allies to earn more discipline and having a good training in many ways to fight against the evil invaders from dominating around the universe as seen in his many upcoming video game appearances: Dream Warriors, Gunner Tanks, Con-Alien and Space Monsters Neo. But unfortunately, his military rank is private nor rookie.

As the similarity to Steve from Newgrounds, he wore tank man's uniform, his helmet with eyeglasses-like lens, gray gloves and boots made with leather but with gray color. He also appears anywhere in some media like web comics, artworks, animated videos and video games.

I'll be in my game once my first top-down shooter game Space Monsters is done.

Although I can't finish it unless my first top-down shooter game Space Monsters is done. I'll give information about him in this game soon. 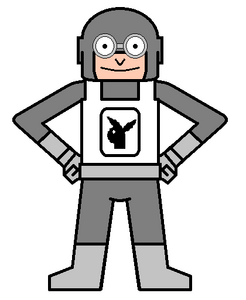 My original artwork for my OC based on myself. 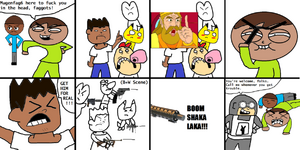 In the 2nd part of lightningdood's Celebration Strip at bottom right.
Add a photo to this gallery 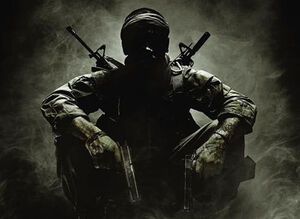 The entire background from Call of Duty: Black Ops.
Add a photo to this gallery
Retrieved from "https://hero.fandom.com/wiki/User:Rabbitgentleman?oldid=1554695"
Community content is available under CC-BY-SA unless otherwise noted.